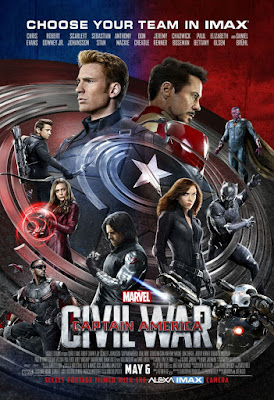 "Captain America: Civil War" may be the most Marveliest Marvel movie to date.

With it's cinematic universe firmly established, Marvel can now tell stories much like it's always done in the comics - by leaping straight into the action and catching up newcomers with exposition delivered between the punches.

That's just with "Civil War" does. There are no tedious re-hashings of previous movies or, God forbid, origin stories. Marvel knows that the masses have already seen the movies, or can catch up if they need to. We're all True Believers now.

Just as in a good Marvel Comic, Cap's new epic includes lots of costumed folks popping up - some by surprise - and joining in the action. There's plenty of humor and brief interactions that remind us of different relationships and move them forward.

While no individual hero gets a ton of alone time on screen, including Cap, no one is short-changed. Each member of this huge cast is unique in his/her powers and personality - not just another cardboard character.

Highlights include the introduction of Black Panther and - sorry, it's already been spoiled - Spider-Man, along with Ant-Man's first interaction with the Avengers. I was left wanting to see more of all three characters, particularly Tom Holland's Spider-Man.

Finally, a real teen is playing Peter Parker (though Marisa Tomei's casting as Aunt May makes me feel ancient). He's instantly likeable and electrifies each scene he's in, even those in which he's most likely just a bunch of CGI code swinging on a CGI web.

Chadwick Boseman delivers an understated performance as the Black Panther, very dignified and appropriately royal. He's a much-different superhero than we've seen on screen before and I think the first Black Panther film is full of promise.

It's cool, too, how the different fighting styles of each hero are all faithfully depicted in the film: Cap leaps into dynamic two-footed, Kirby-esque high kicks, shield on his back, while Black Panther's movements are sleek and silent and Spidey glides acrobatically through the action It all underscores the impression of a comic book come to life.

The focus of this movie is on bringing in the second wave Marvel movie heroes and introducing them to the old-timers. And of which is so much fun that it's fairly easy to forgive the plot, which isn't much different from the previous Captain America film. He's fighting, and trying to protect, his pal Bucky, who's become a brainwashed assassin. What's new is that now everyone is part of the fight, which has split the Avengers into two factions, one led by Cap, the other by Iron Man.

But after all those characters engage in battle, the last third of the movie gets a bit lackluster. We're left missing Spidey and the rest, and end up counting down the minutes until Cap and Iron Man, sort of resolve things, and finally the TWO inevitable post-credits scenes.

Still, it's all highly entertaining and, like I said, leaves you eager to see what's next.