Here's what looks good for November in the world of comics. Click the links to pre-order discounted items from Amazon.

Amazing Spider-Man Epic Collection: Great Responsibility
Volume #2 in the Amazing Spider-Man Epic Collections Written by STAN LEE & STEVE DITKO Penciled by STEVE DITKO Cover by STEVE DITKO Stan Lee and Steve Ditko created an unabashed cultural phenomenon in the AMAZING SPIDER-MAN. Their pitch-perfect blend of Peter Parker's everyday woes and Spider-Man's never-say-die adventures was something undeniably special. And after years of perfecting that formula, they unleashed the definitive Spider-Man masterpiece: the Master Planner saga! Putting Spider-Man through the most wrenching experience of his career, Lee and Ditko defined the spirit of a hero that has inspired millions. This Epic Collection has that complete story and so much more in store: the first appearance of Gwen Stacy, Peter Parker's high-school graduation and landmark battles with the Green Goblin -- plus a spellbinding team-up with that other famous Lee/Ditko creation, Doctor Strange! Collecting AMAZING SPIDER-MAN (1963) #18-38 and ANNUAL #2. 504 PGS. 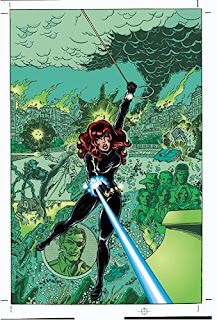 Black Widow: Web of Intrigue
It's been a long, lively life for Natasha Romanova, the former Russian spy known as the Black Widow - fi ghting side-by-side with the Avengers, the Champions, S.H.I.E.L.D., and elsewhere. But could it end with the Widow surrounded by international assassins? Old enemies and new are using Natasha's instructor, her mentor, and her ex-husband against her - or so it seems - but who and what can be trusted in a spy's landscape of lies? Guest-starring Nick Fury, Jimmy Woo and other espionage experts!
COLLECTING: BLACK WIDOW: THE COLDEST WAR GN; MATERIAL FROM MARVEL FANFARE 10-13, BIZARRE ADVENTURES 25 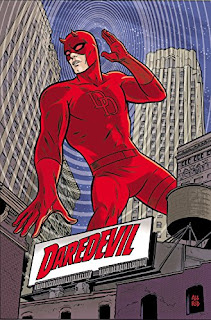 Daredevil by Mark Waid Omnibus Vol. 1
Written by MARK WAID & GREG RUCKA Penciled by PAOLO RIVERA, MARCOS MARTIN, KANO, KHOI PHAM, MARCO CHECCHETTO, CHRIS SAMNEE, MIKE ALLRED & EMMA RiOS Cover by MIKE ALLRED The devil is reborn -- and his adventures will leave you gasping for air! The Man Without Fear visits his unique blend of blind justice on Klaw, the Megacrime cartel and the Mole Man, while the hotly contested battle to secure the Omega Drive will require Daredevil to team up with Spider-Man and not one but two Punishers! But as size-changing scientist Hank Pym enters Matt Murdock's head to destroy nanobots implanted by Doctor Doom, will saving Daredevil's brain cost Matt his mind? Ghosts from the past will haunt DD, while Matt faces a life-or-death drama of his own. With new enemies, new friends and a "grinnin' in the face of hell" attitude, Mark Waid delivers an Eisner Award-winning run like no other! Collecting DAREDEVIL (2011) #1-27 and #10.1, AMAZING SPIDER-MAN (1999) #677, AVENGING SPIDER-MAN #6 and PUNISHER (2011) #10. 728 PGS. 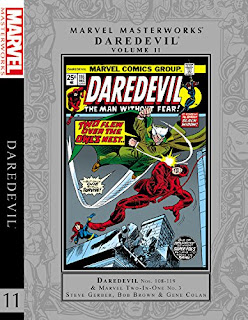 Daredevil Masterworks Vol.11
Written by STEVE GERBER with CHRIS CLAREMONT, GERRY CONWAY & TONY ISABELLA Penciled by BOB BROWN & GENE COLAN with DON HECK, SAL BUSCEMA & JIM STARLIN Cover by GIL KANE Daredevil teams up with not one but two stunning women of Marvel when Black Widow and Shanna the She-Devil join the battle against Black Spectre! Together, the three heroes must uncover the secret leaders of an organization bent on bringing the United States to its knees. It's a massive saga that will pull in heroes from across the Marvel Universe, including Moondragon and the ever-lovin' blue-eyed Thing -- culminating in a battle royale on the White House lawn! Classic villains like Gladiator and Owl abound, and new enemies emerge when Death-Stalker hatches a plan that brings Man-Thing into the fray! Add in a return to Fogwell's Gym, where it all began, and what we have in store are true Marvel Masterworks! Collecting DAREDEVIL (1964) #108-119 and MARVEL TWO-IN-ONE (1974) #3. 264 PGS. 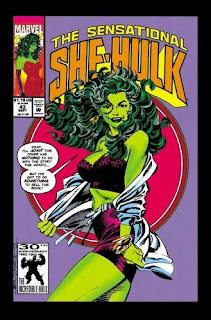 Sensational She-Hulk by John Byrne: The Return
Written by JOHN BYRNE, HOWARD MACKIE & MICHAEL EURY Penciled by JOHN BYRNE, TODD BRITTON & MORE Cover by JOHN BYRNE John Byrne makes his sensational return to the series he started, and She-Hulk's adventures as a super hero who knows she's in a comic book get wilder and more hilarious than ever! Shulkie will face problems high and low as her signature writer/penciler pits her against Spragg the Living Hill and sends her on a puntastic Jenny to the center of the Earth! But will she say "I do" to the Mole Man? She-Hulk will banter, body-swap, and battle tooth and nail as she tackles foes like the Black Talon and his Unliving X-Humed -- and the Living Eraser, who may just wipe her out of comic-book continuity! But is She-Hulk's greatest nemesis Xemnu the Titan, or John Byrne himself?! Collecting SENSATIONAL SHE-HULK #31-46 and #48-50. 464 PGS. 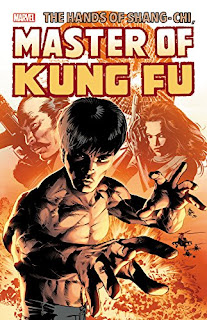 Shang-Chi Master of Kung-Fu Omnibus Vol. 3
Written by DOUG MOENCH Penciled by MIKE ZECK, GENE DAY & RICK HOBERG Covers by MIKE DEODATO & MIKE ZECK Shang-Chi continues to have his deadly hands full with foes like Shockwave, the sinister Agent Syn and the weapons master Zaran! But will his mastery of kung fu be enough to overcome monstrous menaces and the mindless minions of Mordillo? He thought he'd seen the last of his most bitter enemy -- but an unholy resurrection will bring Shang-Chi face-to-face once again with his fearsome father Fu Manchu! And the family reunion will get even more bitter when Shang's sister, Fah Lo Suee, renews their sibling rivalry. There'll be gang wars, death cults and mind-blowing martial-arts mayhem on land and on sea! Plus: What if the Master of Kung Fu fought on the side of Fu Manchu? Collecting MASTER OF KUNG FU (1974) #71-101 and WHAT IF? (1977) #16. 696 PGS. 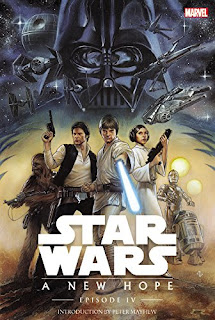 Star Wars: A New Hope
Written by ROY THOMAS Penciled by HOWARD CHAYKIN Cover by ADI GRANOV The original comics adaptation of the greatest space-fantasy film of all is remastered for the modern age with all-new coloring by Chris Sotomayor! Weeks before George Lucas' first Star Wars film hit theaters, Marvel gave fans their first look at Luke Skywalker, boldly asking: "Will he save the galaxy, or destroy it?" You may know the answer, but that doesn't spoil the fun of seeing Star Wars: Episode IV A New Hope like never before -- including scenes that never made the silver screen! When Princess Leia is taken prisoner, Luke, Obi-Wan Kenobi, Han Solo, Chewbacca, C-3PO and R2-D2 ride to the rescue and take on Darth Vader in his awesome Death Star. It's six against a galaxy -- one that's far, far away and a long time ago! May the Force be with you, in the mighty Marvel manner! Collecting STAR WARS (1977) #1-6. 128 PGS. 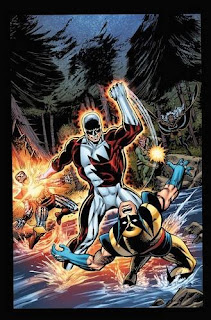 X-Men/Alpha Flight
Written by CHRIS CLAREMONT, BEN RAAB & JOHN CASSADAY Penciled by JOHN BYRNE, PAUL SMITH & JOHN CASSADAY Cover by JOHN BYRNE The X-Men and Alpha Flight have always had Wolverine in common, even when they're fighting over him! But when the stakes get too high, the mighty mutants and the defenders of Canada can set aside their differences and join forces to save the world! In an all-time classic, Alpha Flight and the X-Men face the mythical might of Loki -- and it's a transformative experience! And in a blast from the past, Alpha Flight must ride to the rescue when the X-Men fall victim to Hydra! Plus: Alpha Flight's legendary first appearances -- from the X-Men's furious encounter with Weapon Alpha (a.k.a. Guardian), to the public debut of Canada's premier super-team, to a savage showdown with the wicked Wendigo! Collecting X-MEN (1963) #109, #120-121 and #139-140; X-MEN AND ALPHA FLIGHT (1985) #1-2; and X-MEN/ALPHA FLIGHT (1998) #1-2. 280 PGS. 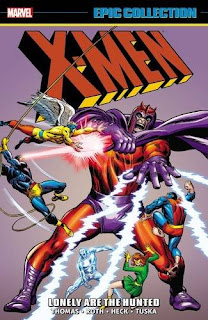 X-Men Epic Collection: Lonely Are the Hunted
Volume #2 in the X-Men Epic Collections Written by ROY THOMAS with GARY FRIEDRICH Penciled by WERNER ROTH, DON HECK & GEORGE TUSKA with ROSS ANDRU, JACK SPARLING, DAN ADKINS & JOHN BUSCEMA Cover by JOHN BUSCEMA Join the original X-Men -- Cyclops, Marvel Girl, Beast, Angel and Iceman -- in adventures from the days when Marvel's merry mutants were the quirkiest quintet in comics, rather than the worldwide wunderkinds they are today! This Epic Collection presents early classics including the first appearance of Banshee; the brief tenure of the sixth X-Man, Mimic; the complete Factor Three saga; the "Origins of the X-Men" feature exploring Professor X's formation of the team; and the debut of new costumes! Then, the X-Men's lives take their most tragic turn -- as their leader is killed! But before they can grieve, Magneto and the Brotherhood of Evil Mutants hit the scene for a battle that culminates in a classic X-Men/Avengers crossover! Collecting X-MEN (1963) #24-45 and AVENGERS (1963) #53. 504 PGS.

Batman and Robin Adventures Vol. 1
Written by PAUL DINI and TY TEMPLETON Art by TY TEMPLETON, RICK BURCHETT, TIM HARKINS and BRANDON KRUSE Cover by TY TEMPLETON In these all-ages tales collected here for the first time, Gotham City's most iconic foes are poised to strike--but they'll have to get through the Dynamic Duo first! Batman and Robin face off against the likes of The Joker, Two Face, Riddler and more. This title collects BATMAN & ROBIN ADVENTURES #1-10 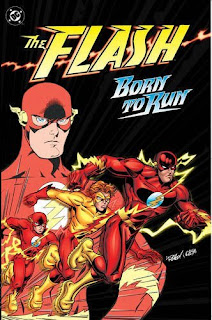 The Flash by Mark Waid Book 1
Written by MARK WAID Art by GREG LAROCQUE, JOSE MARZAN JR., MICHAEL COLLINS, TRAVIS CHAREST, MIKE PAROBECK and others Montage cover Please note: This title is resolicited. All previous orders are canceled. In 1990, Mark Waid's legendary writing career began when he scripted his first issue of THE FLASH. Waid would continue to work on Wally West for nearly a decade, building a world that would keep the character running for years. In this first volume of a new series, Young Wally West is quickly in danger--not only from The Flash's enemies, but from powers that he doesn't know how to control! Collects THE FLASH SPECIAL #1, THE FLASH #62-68 and THE FLASH ANNUAL #4-5. 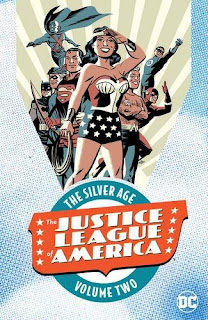 Justice League of America: The Silver Age Vol. 2
Written by GARDNER FOX Art by MIKE SEKOWSKY and BERNARD SACHS Cover by MICHAEL CHO In these tales from the early 1960s, the Justice League of America assembles to take on the threats of some of its greatest foes, including Felix Faust, Dr. Light, the Maestro, the Tornado Tyrant and more. Collects JUSTICE LEAGUE OF AMERICA #9-19. 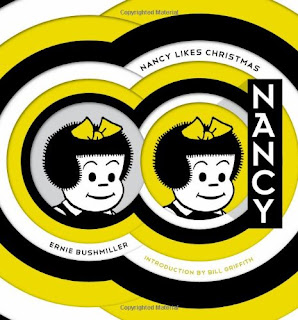 Nancy Likes Christmas: The Complete Dailies 1946-1948
Featuring over one thousand superbly crafted daily strips topped off with a new introduction in comics form by Zippy the Pinhead creator Bill Griffith.