Lot's of people are loving "Luke Cage," including the show's use of music. That's spurred Marvel to quickly release a soundtrack, available here. 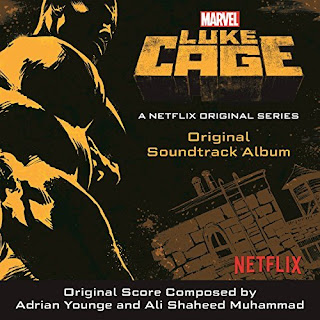 Marvel is set to release the digital soundtrack for the Netflix original series "Marvel's Luke Cage," on October 7, 2016. The album features original score composed by Ali Shaheed Muhammad and Adrian Younge. Influences ranging from David Axelrod, Ennio Morricone, to A Tribe Called Quest and Wu Tang Clan are brought to life in the series and soundtrack. Miguel Atwood-Ferguson orchestrated and conducted a 30-piece orchestra for each episode of the series. The album was executive produced by Andrew Lojero.

The Netflix original series Marvel's Luke Cage, tells the story of Luke Cage (Mike Colter), a hoodie-wearing, unbreakable ex-con who fights to clear his name and save his neighborhood. After a sabotaged experiment leaves him with super strength and unbreakable skin, Luke Cage becomes a fugitive trying to rebuild his life in modern day Harlem, New York City. But he is soon pulled out of the shadows and must fight a battle for the heart of his city – forcing him to confront a past he had tried to bury. Marvel's Luke Cage is rated TV-MA and is streaming now only on Netflix.

Hip-hop music is an integral part of the series and as show runner Cheo Hodari Coker said, "All the episodes are named after different Gang Starr songs. I explain the speed of hip-hop happens at the speed of thought. So if Method Man ran into Luke, not only would he tell the homies about it, he'd also write a freestyle -- that's how hip-hop works. It's today's news tonight."

"It was really about that hip-hop foundation and making sure those drums were just big as day," continued Ali Shaheed Muhammed.

Adrian Younge adds, "From a musical perspective, Ali and I look at this as if we're creating 13 albums for 13 episodes. We all wanted to make something great that happens to be based on our culture."

In addition to score, the album also includes licensed tracks plus the song "Bulletproof Love" featuring Method Man. The track was composed and produced by Adrian Younge and Ali Shaheed Muhammad.

Coker adds "'Bulletproof Love'" is just an incredible collaboration. Method Man is a dream to work with and his instinct is perfect. He's both a comic book geek, but at the same time a hip hop legend. Method Man's enthusiasm for Luke Cage and understanding of the show really made him the perfect choice. 'Bulletproof Love' is unique as the lyrics involve our characters, but also the song is just electric."