This updated edition of the Beach Boys' underrated gem, Wild Honey, couldn't have arrived at a better time of year. It exudes laid-back, sunny fun. 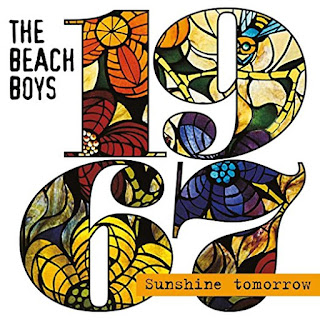 The original album, presented here for the first time in true stereo, was mostly recorded at Brian Wilson's home with the Beach Boys, for the first time in many years, functioning as a real band.  There's a rocking, soulful-but-relaxed vibe to the whole affair. What the LP lacks in studio polish, it makes up for in gentle R&B flavored tunes and, of course, fantastic harmonies.

Carl Wilson steps out front for many of the lead vocals. I wouldn't call his vocal stylings blue-eyed soul, but he does give the songs an upbeat, credible energy that's informed by the mid-60s pop-R&B music in the air at this time. His cover of Stevie Wonder's "I Was Made to Love Her," for example, works just fine.

So does all the rest of the album. Track-by-track, this is a very strong package - perhaps the most consistently great album the group would ever make, although several very good releases followed in its wake.

Like the opening track and the Stevie Wonder cover, most of Wild Honey has a soulful, up-tempo feel. Only on a couple of tracks, the ethereal "Let the Wind Blow," and the goofy closer, "Mama Says," do we glance back at the experimentation and whimsy of Smile/Smiley Smile.

"Darlin'," another up-tempo number sung by Carl, is the most-fleshed out track, featuring Brian-arranged horn parts that demonstrate - despite all the stories of him being in creative retreat at this time - still at the top of his game.

Brian himself takes a strong, soulful lead vocal on "Here Comes the Night." He is still in great form here. His gentle lead and the "bah-bah-bah" backing vocals on "I'd Love Just Once to See You," meanwhile, sets the template for the "sunshine pop" sound that would emerge during the last years of the Sixties. The tune also has a funny, unexpected punchline, demonstrating the group's mischievous side.

Listeners mainly familiar with the Beach Boys through Pet Sounds should check out Wild Honey. Odds are they'll like it quite a bit. There's not a bad track on it.

Longtime fans, on the other hand, will enjoy the many extras in this new package. Along with being a great album, Wild Honey is also very short, and the rest of CD 1 and all of CD 2 in this release are packed with session outtakes and live rarities, most notably, tracks for the abandoned "live" album, Lei'd in Hawaii. Bootleg collectors have heard most of this material before, but it's nice to have it officially released in excellent sound.

The band originally planned to issue a live concert set recorded in Hawaii as a follow-up to the Smiley Smile album, but opted to record studio versions when the live tapes proved poor in quality. The intention was to "fake it" by over-dubbing live audience sounds over the newly recorded studio tracks.

So, here we have new, stripped-down studio recordings of Brian and the rest doing "Help Me, Rhonda," "California Girls," "Surfer Girl" and "Good Vibrations," among other classic tunes. Heard without dubbed over applause and cheers, they sound a bit bare. But the performances are interesting and the singing is very good. The standouts are Brian's cover of the Boxtops' "The Letter" and Bruce Johnson's lead on the Beatles' "With a Little Help from My Friends."

But that's not all, this new set also includes several bona fide live recordings dating from 1967 shows in the Mid-West, along with studio outtakes from both Wild Honey and Smiley Smile. The studio stuff is great. There are some complete alternative takes, instrumental backing tracks and a fair number of fragments. It's not something I'll return to a lot, but I love being able to hear all these isolated elements and layers that show Brian's brilliance as a vocal and instrumental arranger at work. There's never been anyone like him, before or since.

The live stuff, on the other hand, is as bit of a disappointment. The recordings are very, very good. It's the performances that spoil them. The band, particularly Mike Love with his laconic and dismissive  stage patter, don't seem into it, despite playing and singing fairly well. What might've been a batch of great live recordings, including tunes from Wild Honey, is spoiled as a result.

Still, this is a packed release, with much great listening on both disks. The new remix/remaster of the central album is very easy on the ears - not harsh or overly loud. Purists may insist on the original mono, but I can imagine listening to this new version a lot. The new stereo mix, without all the outtakes in this package, is also coming out on vinyl soon and may be worth a listen, too.