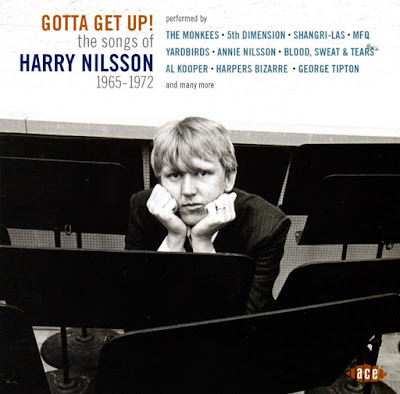 It's the great paradox of Harry Nilsson: He was a fantastic songwriter but is probably best known as a great singer.

His two biggest hits were penned by others: "Everybody's Talking'," featured in the film "Midnight Cowboy," is by folk singer Fred Neill, while his 1971 smash, "Without You," is by Pete Ham and Tom Evans of Badfinger. Meanwhile, Nilsson's version of his own tune, "One," stiffed, but topped the charts when recorded by Three Dog Night.

Apart from that tune, none of Nilsson's own songs were big hits when covered by other artists. But it wasn't for lack of trying. As this new compilation from Ace Records shows, lots of people recorded Nilsson tunes, and some of the versions are very good.

Ace is great at scouring the bins, finding obscure, overlooked singles that are well worth a listen, along with recordings by more familiar artists, and that's the case here.

Nilsson's catchy, tuneful songs were a natural fit for the Monkees, and their faithful versions of "Cuddly Toy" and "Daddy's Song" are included here, as are songs by sunshine poppers Harper's Bizarre and the 5th Dimension, both of whom do justice to Nilsson's soaring harmonies and baroque pop arrangements.

Nilsson fan/friend Al Cooper is featured twice, singing a nice version of "Without Her" with Blood, Sweat & Tears, and, on his own, a fascinating re-arrangement of "Mourning' Glory Story," which alternates sections performed entirely a cappella with sections of Dixieland brass.

For the most part, however, artists stick to the vaudeville meets circus meets the Beatles arrangements featured on Nilsson's own renditions of his songs, although Jose Feliciano nicely applies his "Light My Fire" approach to "Sleep Late, My Lady Friend," turning it into a lounge-y (n a good way), jazzy ballad featured strummed acoustic guitar, strings and a buildup to ecstatic, scatted vocals.

Nilsson's early attempts to break into the songwriting biz are on display, too.  Mostly, it's girl group fare and doesn't sound much like his later work, although "Paradise" by the Shangri-Las is a nice tune, as is the Beach Boys-style "This Could Be the Night," by the MFQ (formerly the Modern Folk Quartet), featuring production by Phil Spector. The song was a favorite of Brian Wilson, who attended the sessions and, years later, recorded his own version for a different Nilsson tribute album.

Some of the more oddball selections on this release include "Good Times," by British actor Alan Lake, husband of Diana Dors. Lake isn't the best singer, but its a great song, heard to best effect as the title track to the Monkees' surprisingly strong 2016 reunion album. Not so great is Andy Williams'  1973 "Remember," which just reminds one how much better Nilsson sings it. And, rather than Three Dog Night belting out the harmonies, we hear "One" in an instrumental version, recorded by Nilsson collaborator/arranger George Tipton

Most of the tunes collected here date from the 1960s and 1970s, with the exception of the opening, title track, sung by his daughter Annie. It's a nice version, though Annie didn't inherit her dad's range and quality of voice. And it doesn't fit well at the start. It would've been better as a bonus cut at the end.

The accompanying booklet is typically great - Ace does a nice job of these. Along with a brief biography of Nilsson, it outlines the history of the all the tracks and mentions lots of other Nilsson covers not included here. I'm up for volume 2 if they get around to it.