Silly us, expecting answers and resolution in the return, after 25 years, of "Twin Peaks."

Those of us who hung in with the new series for all 18 episodes are likely feeling confused, annoyed, darkly amused and/or spellbound after this Sunday's conclusion. But, in the adjective lottery, I doubt few of us could claim "satisfied."

The new "Peaks" ended like the old one, open to myriad interpretations. Any threads wrapped up the vaguely satisfying penultimate episode were unraveled in the conclusion, with all sorts of new questions posed and left unanswered. 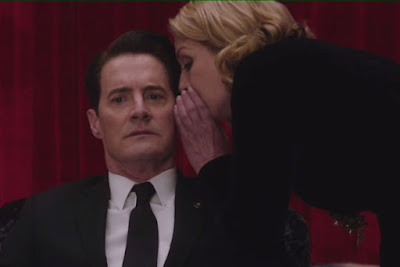 I figured early on, when it became apparent that Kyle McLachlan's "Dougie," a Chauncy Gardner-ized version of FBI Special Agent Dale Cooper, wasn't turning back into his lovable coffee-drinking self any time soon, that this was no "Brady Bunch Reunion." In fact, we saw very little of that Cooper. McLachlan spent most of his time as Dougie or as the dark, Demon Bob-possessed version of our hero (in our house, we called him "Booper.")

We didn't see as much of Twin Peaks, either. Much of the action took place away from that Northwest  hamlet, in the American Southwest. And when we did check in on Peaks, we found it was inhabited by all sorts of characters we'd never met, whose storylines were already in progress. Things hadn't stayed put for 25 years, we joined things in progress and had either to catch up, or do our best trying.

Amidst such change and mystery, we grasp on to what we do know, or think we know. Or we formulate our own theories in an effort to make sense of things. Maybe that's what Peaks creators David Lynch and Mark Frost intended.

The final episode shows us a Cooper (I don't know if he's "our" Cooper) seemingly trying to force facts to fit his conception of the mystery of Laura Palmer. He finds, through apparently random means, a woman who looks like Laura and brings her to Twin Peaks (or, a Twin Peaks) where nobody has every heard of her. Things don't fall back into place and Cooper seems as uncertain why as the rest of us. Puzzling out the meaning of Laura's death, or the roots and reasons for evil in our world, just brings more mystery, Lynch and Frost (seem to) say.

Lacking a satisfying dramatic conclusion to it all, I choose - and maybe it's just a copout or justification - to simply surrender to Lynch's dream/nightmare logic, enjoy all the stunning imagery, relish in the quirky humor, grasp what I can understand and accept that I'll never understand it all.

If this "Peaks" had somehow managed to provide satisfying answers and neatly tied-up loose ends, would it be successful? Would it even be "Twin Peaks"? I don't think so. Instead we're left unsatisfied and maybe even a little aggravated, but moved and affected by what we've seen. We'll be talking about this "Peaks" for a long time, just like the first one.

Silly us, expecting answers, when "Peaks" has always been about questions.
at September 05, 2017