The Monkees meet the Archies!

Here's a comic book cover Michael Allred was born to draw: The Archies meet the Monkees!

The Riverdale rockers will meet the Pre-Fab Four in issue four of a new Archies ongoing series, which starts this month.

According to the Comic Book Reporter: "The meeting between The Archies and The Monkees will take place thanks to some good, ‘ol fashion time travel, which will allow Archie and the Riverdale gang to meet the Monkees — Micky Dolenz, Michael Nesmith, Peter Tork, David ‘Davy’ Jones — in their prime."

Mark Pinkus, the president of Rhino Entertainment, owns the rights to The Monkees name, logo and back catalog — which he acquired back in 1994 — and sees the inclusion of the band as a way to introduce the group to new fans. “What a great opportunity to expose a whole new audience to the classic music and antics of The Monkees,” he said in a statement. “I look forward to seeing Micky, Davy, Mike, and Peter in Riverdale!”

Allred's cover is one of a few variants for the issue (and definitely the coolest). 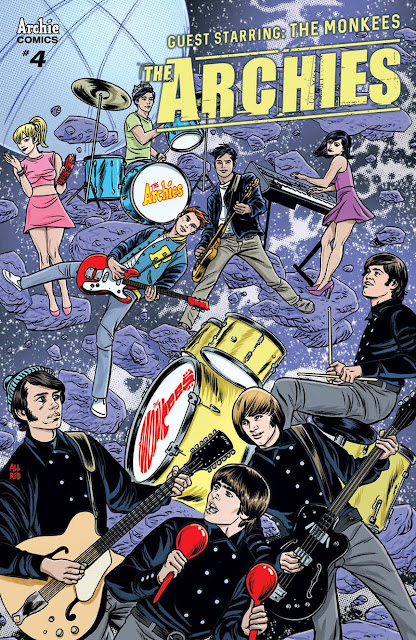