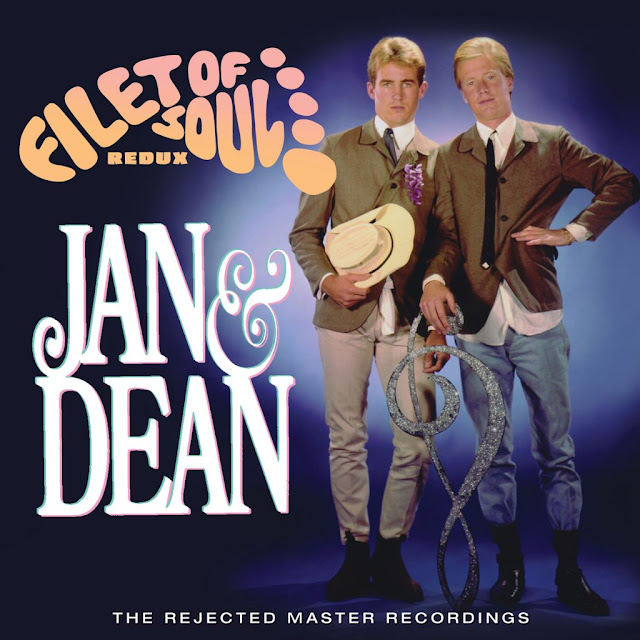 Jan Barry and Dean Torrence don't get mentioned alongside pop's pioneering geniuses such as the Beatles or the duo's friend, Brian Wilson. But in late 1965 they recorded one of the most bonkers albums never released.

"Never" because Filet of Soul (a riff on Rubber Soul. Get it?) was rejected by the Jan and Dean's label. Twice. Only now has Omnivore Records released it in its originally intended form.

Filet was planned as a live album, a quick and easy way for Jan and Dean to fulfill their contract with Liberty Records and move onto bigger, better things.

By 1965, they'd grown restless with the music business and had begun to see themselves more as a  comedy duo. They had grand plans, including filming a star-filled comedy feature ("Easy Come, Easy Go") with themselves at the center and a TV series with "Bewitched" producer William Asher.

With all of this on the horizon, putting out another pop record for the kids seemed like a nuisance, but it had to be done.

So,  the pair booked a band, scheduled a show and dutifully ran through a roster of songs including their own songs and covers of hits, including three Beatles tunes.

The performances, backed by a crack band of L.A. "Wrecking Crew"members, weren't bad. But Jan and Dean weren't thrilled with the outcome and decided to tweak the songs in the studio.

So, the pair opted to take a decidedly different approach to assembling an album. Or disassembling one.

"We headed to the sound library just down the hall," Torrence recalls. "We each grabbed a stack of sound effects records and headed back to the studio."

Sitting at the mixing disk, the pair added sound effects liberally and randomly to the live tracks: artillery fire, glass breaking, babies crying, manic laughing, sneezing and screams. These were dropped in, completely at random, between and during the musical numbers.

Songs included on the album are only partially performed, but we hear Jan and Dean telling, or trying to tell, lots of jokes and, yes, introducing the band (to the accompaniment of more sound effects).

The resulting collage is like a funnier, more tuneful version of "Revolution #9." It's also a commentary on the teen-focused music industry of the time. Jan and Dean manage to be hilarious and contemptuous of their fans at the same time. "Now we're going to perform one of our lesser hits," they announce before launching into one of their biggest, "Dead Man's Curve," which is marred with more sound effects, sped up vocals and an incomplete ending.

According to Torrence's liner notes, "the shit hit the fan" when the duo presented the album to the execs at Liberty and they were sent back into the studio to remove some of the off-beat material in favor of more songs. Then Berry got into the horrendous car wreck creepily foretold in "Dead Man's Curve" and, with the duo out of commission, the label seized the tapes and issued a "normal" version of the LP.

It was only on the two-LP Jan and Dean Anthology in 1971 that we got to hear bits and pieces of the intended album. And now Omnivore has thankfully provided us with the whole thing.

For what's essentially a big middle finger to their record company, Filet of Soul is an extremely entertaining LP, fully deserving of its cult status among fans. Which isn't to say that lot's of people don't hate it. But if you're willing to enjoy the album within its context it's a gas. Also great for confounding people at parties.
at November 16, 2017

Email ThisBlogThis!Share to TwitterShare to FacebookShare to Pinterest
Labels: Jan and Dean, reviews