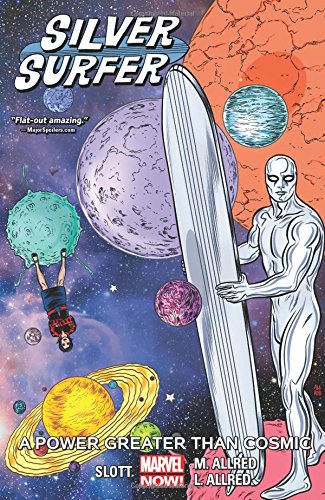 This new collection brings to an end a uniquely whimsical and heartwarming chapter in Marvel Comics history.

The Dan Slott-Michael Allred run on Silver Surfer has essentially been a love story between Galactus' former herald and Dawn Greenwood, a woman from Earth. Over the course of the story, the Surfer opens the cosmos to Dawn as she opens his heart.

Slott's writing is funny, fresh and hugely imaginative, even while key influences, such as the classic and modern "Doctor Who," show through. Allred's art, created in collaboration with his wife, the colorist Laura Allred, is equally imaginative, conveying humor, beauty and wonder with ease.

Throughout his history, the Surfer has generally been a gloomy Gus, and with good reason. To spare his world from Galactus, he became the Planet Eater's advance man, leaving his home and his loved one to surf the stars, scouring new worlds for the cosmic giant to consume. The Surfer lives with the knowledge that he's responsible for billions of deaths across the universe as a result of his work for Galactus. And then, when he leaves the giant one's employ, the Surfer is trapped on Earth, left to dwell on all that he's done. Good times.

To take such a depressed (and sometimes depressing) character and place him in a cosmic romantic comedy is a weird step, but Slott makes it work. His Surfer is a guy getting back in touch with simple joys of life, knowing that he needs to, and wants to, move on. He's regained his ability to travel the universe (actually, he did quite some time ago) and now he has someone to share it with.

Dawn is another fully realized character. She's quirky - always dressed in ladybug patterns - funny, feisty, smart and charming. As with the Doctor's companions on "Doctor Who," she is the series' humanizing factor. She's the one who channels our wonder and brings an earthly perspective to a lead character who might otherwise not be so relatable.

In this collection. Surfer and Dawn, among other things, gamble away the Surfer's board at a cosmic casino, get swallowed by a giant space whale and deal with tragedy back on Earth. And, yeah, they finally profess their love for one another.

In the end, it's sad to bid these characters, at least temporarily, goodbye. I hope, as Michael Allred says in a written piece in the back of this book, that "the old team" will get together again soon. Slott and the Allred are a fantastic pairing (tripling, if you count Laura. Which you should). It's rare to see, especially in American comics published by one of the Big Two, a creative team provided with the support and freedom to work for this long, and this well, together. The result has been truly special.
at January 03, 2018