Review: The Who Live at the Fillmore East, 1968 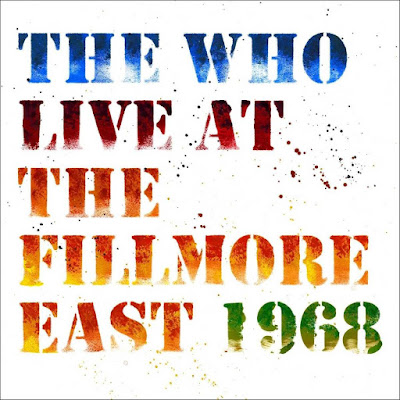 Tommy and Quadrophenia are great, but I prefer The Who as a scrappy young singles band.

Before his concepts expanded to double-album length, Pete Townshend's best work appeared at 45 r.p.m. in two- or three-minute bursts of tuneful power pop. And it's this Who that's on display in this new collection, bits of which have only previously been available on bootleg.

The collection's track listing shares a number of tunes with The Who's first-released live album, the incredible Live at Leeds, recorded in 1970. But this one captures the band a couple of years earlier, pre-Tommy, and includes several tunes that would be lost from their setlist once that deaf, dumb and blind kid re-defined the group's image and mission.

So, here we get the band blasting through versions of "I Can't Explain" and "Boris the Spider," along with "Relax," from the then-recent The Who Sell Out LP.

Townshend still gets a chance to get conceptual, with oddball tunes such as "Tattoo" (about getting one and suffering your parents' wrath as a result), "I'm a Boy (about a kid forced to dress as a girl, which is a really peculiar listen from today's vantage point) and maybe oddest, and rarest, of all, a live performance of "Little Billy," the band's anti-smoking tune, recorded as a public service announcement for the American Cancer Society.

The band's "mini-opera," "A Quick One" is also performed, and executed as flawlessly and with as much flair as it was in the band's appearance on The Rolling Stones' "Rock and Roll Circus" TV special. Reportedly, the Stones felt they'd been so overshadowed by The Who that they shelved the show for decades.

These originals are surrounded by a healthy dollop of The Who's "maximum r&b," with the band performing live standards such as "Summertime Blues" and "Shakin' All Over" along with Eddie Cochran's "My Way" and "C'Mon Everybody."which Pete introduces as "hard rock." And it is.

Throughout this set's first disk, the group stampedes through the tunes, playing aggressively, but concisely - never forgetting the hooks or melodies. Keith Moon's drumming sounds at times like a kit falling down a flight of stairs and Townshend's slashing guitar chords and soloing threaten to spiral off into the ether, but bassist John Entwistle keeps it all anchored down. Roger Daltrey's lead vocals are strong throughout and, while Townshend and Entwistle's background harmonies falter on occasion, this is a virtuoso performance. The Who, live, was the best you could get.

It's disk two where all hell breaks loose, and the band signals the longer-form, jamming live performances they'd gravitate toward on Live at Leeds. Here we get a full 30-minutes plus of "My Generation." The performance reminds us that Townshend was one of the great 1960s guitarists - often overlooked in comparison to Hendrix or Clapton. But he was an innovator, too, playing in very much his own style - making creative use of feedback and avoiding blues-jamming cliches in favor of more abstract riffing and soloing.

For Who fans, this one's a must. It captures the band at a pivotal time - bridging their pop and rock years. It's amazing how much noise three guys and a singer could make.

Email ThisBlogThis!Share to TwitterShare to FacebookShare to Pinterest
Labels: reviews, The Who