Coming up: Make Mine Mondo! 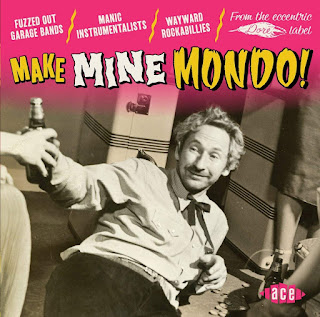 Out July 6. Order from Amazon now.

Quirky in the extreme, 'Make Mine Mondo!' does what it says on the tin and then some. Culled from the vaults of the eccentric Dor label, fuzzed-out garage bands, wayward rockabillies and mental instrumentalists cook up a mele of mondo mayhem in long-ago Los Angeles. Comprising 11 extremely rare and sought after garage band singles (nine previously uncompiled and new to CD); eight previously uncompiled instrumentals (also new to CD) and several unreleased rock'n'roll/R&B numbers, all remastered for legitimate first-time release, 'Make Mine Mondo!' screams for attention in the busy collectors' market.