Review: "Won't You Be My Neighbor?" 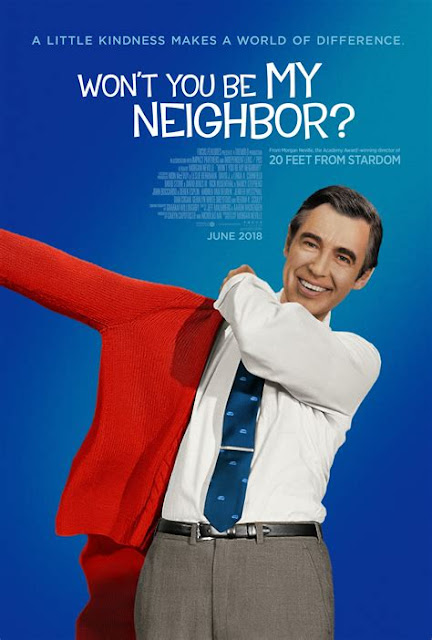 How well do you know your neighbors?

As a pre-schooler, I knew Mr. Rogers as a friendly guy who appeared on weekday afternoons on the family Zenith. In black and white.

He'd walk in his front door, greet us with a smile while singing a cheerful, welcoming song. He'd take off his suit jacket, put on a comfy sweater and switch out of his Oxfords into what looked to me like a pair of J.C. Penney sneakers.

From there, Mr. Rogers would feed his fish and talk to Picture Picture - sort of a proto-iPad mounted on his wall, which shared pictures and information - and fire up his model trolley for a trip to the Land of Make Believe.

I always thought the trolley was the coolest part.

Millions of American kids joined Mr. Rogers in this daily routine, which continued for more than 30 TV seasons. And, fittingly, it's how this new documentary of Fred Rogers' life opens.

It's easy to make assumptions about Mr. Rogers from his show. He's dorky. A square. His TV house looks simple and cheap. The Land of Make Believe looks more low-budget than the play area of the nearest McDonalds. But, like he kept telling us, Mr. Rogers was special. And Morgan Neville's film demonstrates the many ways how.

Fred Rogers was an ordained Presbyterian minister who found his calling not in a church, but on children's television. And we see how he thoughtfully, and sometimes shrewdly, taught the values of respect, responsibility, acceptance and, indeed, universal love, through his daily program.

During some of the most violent and challenging moments of the Civil Rights struggle, he brought on an African American cast member and, in one now-famous segment, invited him to cool his feet in the same wading pool.

Following the murder of Robert F. Kenney, Rogers knew that kids would have seen news coverage of the event orheard the word "assassination," and he addressed their confusion, fear and questions in a segment of his show. He also helped children work through the emotions of a pet dying or meeting someone with disabilities.

The film uses vintage clips to detail these moments and includes interviews with the show's cast and crew and Rogers' wife and two sons.

We learn how Rogers went to bat for PBS funding in the networks early days and likely saved it from a budget-cutting Senate panel. We see him calmly face down the stony faced politicians, melting their cold hearts with his description of his program and why it mattered to kids.

Urban legends surrounding Rogers - that he was a Navy SEAL or an Army sniper or that he was gay - are all addressed openly in the film and dismissed. This isn't a whitewash, but an honest portrait. We learn that, despite his calm and kindly demeanor, Rogers could get pissed off. And he would sometimes doubt his abilities and effectiveness.

We see how Rogers was attacked later in life, both by the Westboro Baptist Church and by rightwing pundits who blamed him for supposedly enabling a generation of youth who had the nerve to view themselves as "special" due to his show's refrain of accepting and valuing oneself. It's an interesting perspective, given that Rogers was a lifelong member of the Republican Party and espoused Christian values throughout his decades on public television.

By saying kids were special, he wasn't suggesting that they abdicate responsibility or expect a free ride in life. He was teaching them to respect who they were in life and to respect others, no matter how they might differ from you.

That message, and this film, come at a perfect time, given the world's current political polarization and demonization of "the other." Rogers demonstrated a wisdom, patience and willingness to listen that many or our leaders would do well to emulate.

Like most TV-watching kids of the late 1960s and early 70s, I moved on quickly from "Mister Rogers' Neighborhood" to "Sesame Street" - a hipper, more lively part of town. But I was glad to know my neighbor, Fred Rogers, and glad to know him, now, even better.
at July 12, 2018