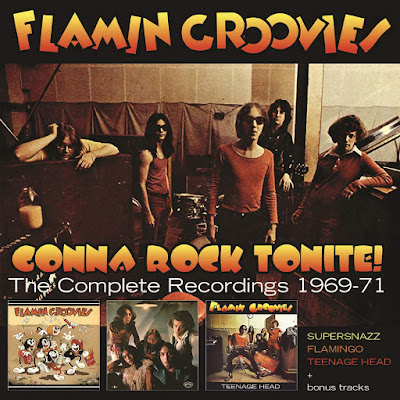 Out March 1 from Grapefruit.

Irrespective of musical direction, sales figures or personnel changes, The Flamin' Groovies have always had greatness attached to their name. Cyril Jordan's mid-Seventies revamp of the band was certainly a huge influence on entire generations of skinny-tied power poppers, but the Groovies took their first tentative steps on the long and winding road to cult stardom back in the late Sixties, when lead singer, original band leader and rock'n'roll aficionado Roy Loney battled for the upper hand with young pup and Beatles obsessive Jordan. After the tentative, privately-issued 10" mini-album debut Sneakers, the Groovies made the transition from San Francisco also-rans to genuine contenders with a trio of peerless albums - Supersnazz, Flamingo and the particularly magnificent Teenage Head - for major labels (Columbia's Epic imprint and Buddah subsidiary Kama Sutra). Bolstered by sundry outtakes, alternative versions and single mixes, those three albums now appear under one roof for the first time with Gonna Rock Tonite!, a complete anthology of the band's studio work during the pivotal 1969-71 timeframe: halcyon days that ended in late 1971 when Loney abruptly quit the group he'd formed just a few short years earlier. Bursting with creative tension, wilful diversity and absurdist wit, Gonna Rock Tonite! Climaxes with the classic album Teenage Head, a brazen attempt to out-Stone the Stones that saw one critic describe it at the time of it's mid-1971 appearance as "close to being the best hard rock album ever released by an American group". The definitive issue of these definitive recordings, Gonna Rock Tonite! #is a 3-CD set taken from the masters and housed in a striking clamshell box. It includes a 20-page booklet that features a new 7,500 word essay on the band.

15. Laurie Did It (Single Version)

3. Headin' for the Texas Border

4. Sweet Roll Me on Down