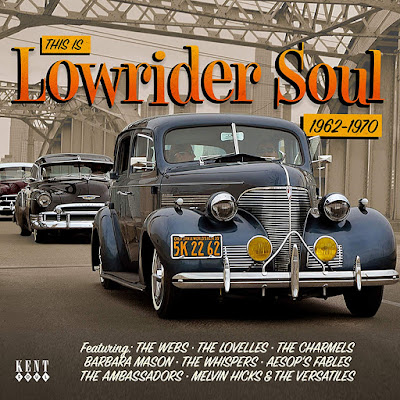 Out Feb. 8. Order from Amazon now.

The Mexican and central and South American immigrants and their descendants who originally settled mainly around East Los Angeles have had an affinity for sweet soul love ballads for many years. In recent times the collecting scene has intensified and spread to soul fans around the world who, already sympathetic to the music, were intrigued by the titles that were finding such favour among this very hip scene. Scene classics are provided by the Whispers, Barbara Mason, the Ambassadors, Brenton Wood and Lee Williams & the Cymbals, most of which are quite well known in Europe, too. More esoteric picks are provided by the Endeavors, Aesop's Fables, Jimmy Conwell, the Vows and the Interpreters. Being Kent, we suggested some previously unreleased masters to the selectors and they were knocked out to include the Lovers Bay Area-recorded 'When You're Poor' and the Billy Terrell, Ray Dahrouge and Tony Camillo-written-and-produced gem 'I'm Just Passing Time'; their inclusion has caused a buzz around the scene.

4. Where Were You - Brenton Wood

7. Oh How It Hurts - Barbara Mason

8. I Really Love You - the Ambassadors

12. It's Not That Easy - Reuben Bell with the Casanovas

17. Be Kind to Love - the Interpreters

18. When You're Poor - the Celestials

23. Crying All By Myself - William Bell