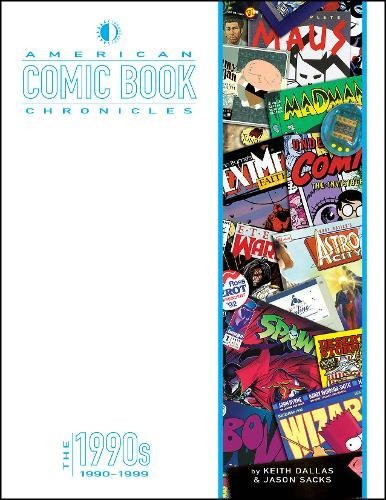 Leafing through the pages of this latest hardcover entry in Tomorrow Publishing's comprehensive history of American comics, I kept thinking, "Man, I bought a lot of crappy comics in the 1990s."

Being mainly a reader of superhero titles, though, so, apparently, did everyone during that decade. The covers on display here made me wince at recollections of vacuous storylines; dumb characters;  exploitative crossovers; chromium-"enhanced" covers, and ugly, stiff, over-rendered artwork full of improbably grotesque and/or sexist anatomy. This stuff is so tacky it's a wonder we don't refer to this as the Spencer's Gifts Era of comics. Co-authors Jason Sacks and Keith Dallas deserve hazard pay for taking on this era, which they do with admirable objectivity.

Reading through the book, one sees that the 90s, comic book-wise, weren't all bad. Just mostly so. There was some good, interesting stuff going on -  "Batman: The Animated Series," "Bone" by Jeff Smith; "Madman," by Michael Allred; "Astro City" by Kurt Busiek; "Sandman Mystery Theater" by Matt Wagner; "Death" by Neil Gaiman; "Big Numbers" by Alan Moore and Bill Sienkiewicz - but also so much bad. The early Image Comics, Wizard magazine, the Spider-Man clone "saga," "Heroes Reborn," and stunt storytelling such as the death of Superman and Batman's broken back are all recounted here in cringe-inducing detail, with pictures that make it all even more embarrassingly painful.

Reading along, I realized that the business travails of the comics industry during this time stand out as far more interesting in my memory than any of the dreck I read from Image or the Big Two. This was the time of Marvel's bankruptcy, rampant speculation and manufactured "collectables." We see how the outsize egos and immaturity of people in the business, such as Image's cocksure founders, led to irresponsible practices that actually put comic book shops out of business.

I believe, and hope, that comics publishers and creators learned a lot during the 1990s. As a reader and fan, I learned quite a bit about what I value in comics (character, storytelling and imagination as opposed to "collectability," gloss and hype) that's me a brighter consumer more adept at seeking out and finding work of high quality. And, lest we forget, this excellent but painful history of American comics' ugliest era is recounted here to help us all remember.