Coming Up: Gladys Knight & The Pips: On And On, The Buddah / Columbia Anthology 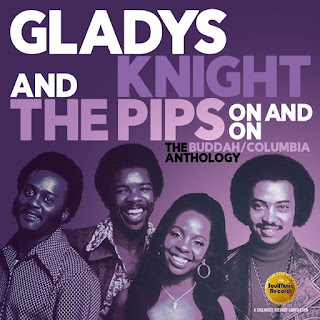 UK two CD set. SoulMusic Records is very proud to present On & On: The Buddah/Columbia Anthology, a hit-filled collection by the iconic Gladys Knight & the Pips, whose international appeal spanned over three decades from the mid-'60s to the mid-'80s.

This 37-track collection of recordings by the legendary family group (Gladys, brother Merald 'Bubba' Knight and cousins William Guest and Edward Patten) focuses on a particularly successful period of their consistent presence as mainstay global hitmakers from 1973-1985.

Disc One of this anthology chronicles the group's five-year run of non-stop hits for Buddah Records, including the timeless 'Midnight Train To Georgia', 'Best Thing That Ever Happened To Me' and a live medley of 'The Way We Were' and 'Try To Remember'.

Drawn from eight Buddah albums that included production by Curtis Mayfield, Tony Camillo and Van McCoy among others, The Buddah Years features over a dozen charted singles and an alternate mix of 'Make Yours A Happy Home' from the Claudine soundtrack. Disc Two chronicles the group's five years with Columbia Records during which they initially reunited with Nick Ashford & Valerie Simpson (with whom they had worked at Motown), resulting in further hits such as 'Landlord' and 'Taste Of Bitter Love'. Further success came with 'Save The Overtime (For Me)', 'You're Number One (In My Book)' and an early version of the pop classic 'Wind Beneath My Wings'.

A first-of-it's-kind comprehensive collection drawn from both Buddah and Columbia albums by the group, it includes all (22) US charted hits released over a twelve-year span. Liner notes by renowned US writer Kevin Goins include quotes from former Buddah executive Cecil Holmes, songwriter Jim Weatherley, arranger/musician Ray Chew and producer / songwriter Charles Kipps; with remastering by Nick Robbins, artwork by Roger Williams.

3. I've Got to Use My Imagination

4. Best Thing That Ever Happened to Me

8. The Makings of You

19. Come Back and Finish What You Started

3. Still Such a Thing