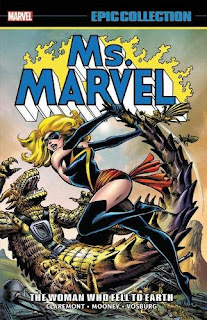 Ms. Marvel Epic Collection: The Woman Who Fell to Earth
Chris Claremont weaves complex plots and compelling characterization in the conclusion of Ms. Marvel's original adventures. The highlights are many: Ms. Marvel meets the Avengers for the very first time. Mystique makes her first appearance. A battle with Ronan the Accuser brings Ms. Marvel and Captain Marvel together and leads to an all-new look for our heroine! Encounters with underground lizard-men, Deathbird, the Guardians of the Galaxy and Sabretooth set the stage for a controversial Avengers saga and a life-altering battle with Mystique and Rogue. The story reaches its epic conclusion in a Marvel milestone including Ms. Marvel, the X-Men and the Avengers!COLLECTING: MS. MARVEL (1977) 15-24, MARVEL TWO-IN-ONE (1974) 51, MARVEL SUPER-HEROES (1990) 10-11, AVENGERS (1963) 200, ANNUAL (1967) 10 AND MATERIAL FROM AVENGERS (1963) 197-199 AND MARVEL FANFARE (1982) 24 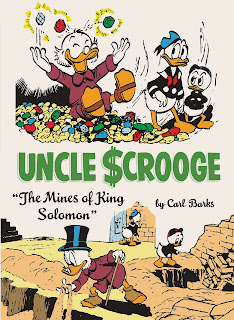 Walt Disney's Uncle Scrooge: "The Mines Of King Solomon"
When Uncle Scrooge decides to take Donald and the nephews on a world tour to inspect the many businesses in his far-flung empire, he never dreamed he’d wind up uncovering the fabled lost treasure of the even-more fabled King Solomon! Then, to settle a bet over who’s the better salesman, Scrooge and Donald wind up in Southeast Asia - and Donald’s winning! Until Scrooge notices something unusual about the local architecture in "City of Golden Roofs." And the Beagle Boys come calling again with a devious scheme to drill Scrooge’s money right out from under him! Plus: the oddball inventions of the ever-eccentric Gyro Gearloose! Carl Barks delivers another superb collection of clever plot twists, laugh-out-loud comedy, and all-around comic book brilliance.
at May 01, 2019