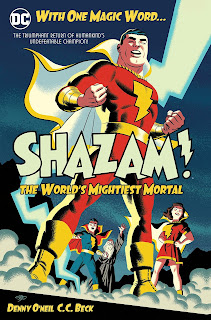 Shazam: The World's Mightiest Mortal Vol. 1
In 1973 DC brought back one of comics' most popular heroes: Captain Marvel, also known as Shazam!, whose Golden Age adventures sold in the millions of copies. These new adventures combined the cartoony art of C.C. Beck, the original artist from the 1940s, with the modern, tongue-in-cheek sensibility of writers including Dennis O'Neil (Batman, Green Lantern/Green Arrow). Collects Shazam! #1-18. 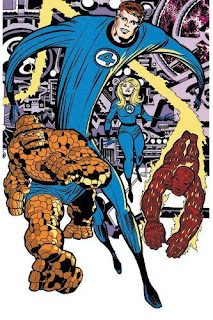 Kirby is...Fantastic! King-Sized Hardcover
Kirby is the greatest storytelling mind in comic book history. Kirby is an architect of the world's most-famous universe of characters. Kirby is...Fantastic! The fi rst in a line of super-giant "King-Size" hardcovers celebrating the incomparable talent of Jack "The King" Kirby, Kirby is...Fantastic! brings together a selection of all-time great issues from his tenure on Fantastic Four. Featuring the 1960s debut of the Sub-Mariner, knitting together Marvel's Silver and Golden Ages; earth-shaking battles between the Thing and the Hulk; the debut of the Black Panther; the unveiling of the utopian man-god "Him" (a.k.a. Adam Warlock); a life-or-death epic battle with Doctor Doom in the heart of Latveria; and a deadly trip into the Negative Zone topped off by the history-making birth of Franklin Richards. 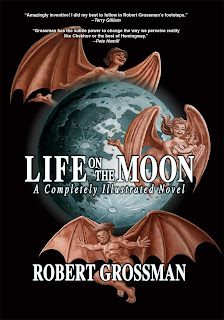 Life on the Moon
In 1835, New York newspaper The Sun published a series of six articles declaring the discovery of life--and even civilization--on the Moon, which the paper attributed to the famous contemporary astronomer Sir John Herschel. According to the Sun, the lunar inhabitants included unicorns, bison, bipedal tail-less beavers, and intelligent humanoids with bat-like wings.

Life on the Moon is a full-length graphic novel capturing this mythical world. Creator Robert Grossman said the book is set in a time when "many of the signal achievements of the 19th Century still lay well in the future, Andrew Jackson was president, the steamboat was the summit of technology, and news traveled slowly." The unfettered novel includes real historical figures such as P.T. Barnum, Jean Jacques Audubon, Lorenzo Da Ponte, Charles Goodyear, and Edgar Allan Poe. Grossman stated that, "Life on the Moon is meant to be at least partly funny, and has a rip-roaring sci-fi ending." Grossman concluded, "I read somewhere that William Randolph Hearst insisted that everything he produced had: Tears, laughs, loves, and thrills. Life on the Moon has all that and more." 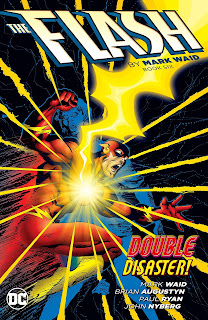 The Flash by Mark Waid Book 6
In this next graphic novel chapter, the mayor of Keystone asks the Flash to relocate himself away from Keystone City -- but trouble still manages to find the Fastest Man Alive in his new home of Santa Marta. First, the Flash saves a presidential candidate from the Top, a member of the Rogues. The, Mr. Frost strikes -- and his illusions threaten to destroy both the Flash and his new home. And when word spreads that the Flash has moved to a new city, several of his greatest foes show up to cause trouble, including the earthquake causing Major Disaster! The sixth volume of The Flash by Mark Waid collects The Flash #119-128 and the two-part series Green Lantern and The Flash: Faster Friends, Flash Plus Nightwing #1, Showcase '96 #12 and a story from DC Universe Holiday Bash #1 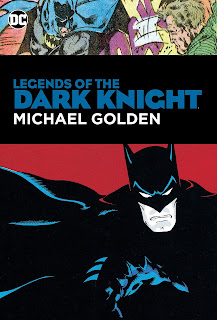 Legends of the Dark Knight: Michael Golden
The 1970s stories starring Batman featuring the slick artwork of Michael Golden are collected for the first time, including appearances by the Demon and Man-Bat. Golden is renowned for his design skills and unique interpretation of Batman and other heroes, as seen in these early stories, written by well-known comics writers including Dennis O'Neil, Gerry Conway and Mike W. Barr. Collects shis collects stories from Batman Family #15-20, Batman #295, #303, DC Special Series #15, Detective Comics #482, Batman Special #1, Batman: Gotham Knights #22. It also collects the covers from Detective Comics #625-626, 628-631, 633, 644-646, Batman #484-485, Showcase '93, Nightwing#66-77 & #129-130 and the Man-Bat entry from Who's Who in the DC Universe #12. 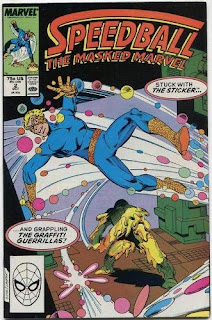 Speedball: The Masked Marvel
Few creators have left their mark like the inimitable Steve Ditko. His unmistakable creative vision brought the world the Amazing Spider-Man, Doctor Strange and, in 1988, Speedball! Together with writers Roger Stern, Tom DeFalco and Jo Duffy, Ditko crafted the adventures of Robbie Baldwin, a high school student with strange other-dimensional powers that create an energetic kinetic field that turn him into Speedball! In the classic Ditko style, Baldwin's life is complicated -- his father is a district attorney with no love for costumed vigilantes and there is serious marital strife between Robbie's parents. This Complete Collection brings together every Steve Ditko tale of the New Warrior-to-be for the very first time.COLLECTING: SPEEDBALL (1988) #1-10 and Material from AMAZING SPIDER-MAN ANNUAL (1964) #22, MARVEL AGE ANNUAL (1985) #4, MARVEL COMICS PRESENTS (1988) #14 and #56, and MARVEL SUPER-HEROES (1990) #1-2 and #5-6
at May 29, 2019