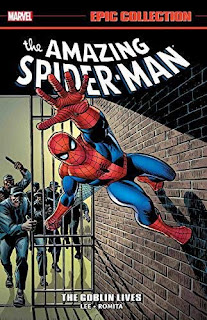 Amazing Spider-Man Epic Collection: The Goblin Lives
It's horror on the home front when Peter Parkerbecomes the third wheel to comics' odd couple. Yes, Aunt May's found a new special friend - in the person of Dr. Otto Octavius! While a klonk on the head may help Spidey forget that one, teaming up with Doc Ock isn't going to improve his image as public enemy #1! Next, Spidey battles his way through Ka-Zar, Vulture and Mysterio, before facing his true nemesis. Norman Osborn's memory has returned and with it - the Green Goblin. The only villain to uncover that Peter Parker is Spider-Man knows and these two icons meet in a gigantic 58-page magazine masterpiece that will truly captivate you. Also featuring the first appearance of Captain Stacy.COLLECTING: AMAZING SPIDER-MAN (1963) 54-67, SPECTACULAR SPIDER-MAN (1968) 1-2, MARVEL SUPER-HEROES (1967) 14 AND MATERIAL FROM NOT BRAND ECHH (1967) 6, 11 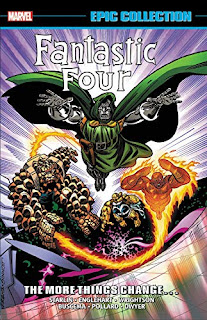 Fantastic Four Epic Collection: The More Things Change...
Big changes for Ben Grimm and Sharon Ventura! The Thing is still adjusting to his new role as leader of the FF, whose lineup now includes the Human Torch, Crystal and Sharon "Ms. Marvel" Ventura! But as Crystal's presence complicates Johnny's marriage, things get extra rocky for Ben and Sharon -literally! When more cosmic rays transform the two in unexpected ways, how will they react to their monstrous new mutations? Meanwhile, the Fantastic Four get involved in Doctor Doom's war with Kristoff Vernard - but on whose side? And a trip to the Mole Man's realm leads across time and space, and to encounters with Belasco, Master Pandemonium and...the Beyonder! Plus, Hulk and Thing throw down in two super-sized slugfests!COLLECTING: VOL. 18: FANTASTIC FOUR (1961) 308-320, ANNUAL 21; INCREDIBLE HULK (1968) 350; MARVEL GRAPHIC NOVEL: HULK/THING - THE BIG CHANGE
at June 19, 2019