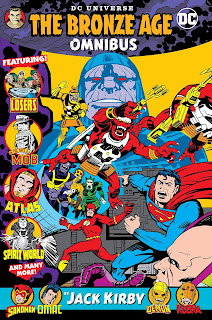 DC Universe Bronze Age Omnibus by Jack Kirby
In the world of comic books, few writers or artists loom as large as the legendary Jack Kirby. By the early 1970s, he'd already spent 30 pioneering years innovating and exploring the comics art form. After a groundbreaking decade at Marvel, Kirby returned to DC Comics and immediately began crafting some of his best-loved works, most notably his cosmic epic, the Fourth World saga. For anyone but Jack Kirby, this colossal masterpiece would have been contribution enough to the DC canon, but "the King" spent that same period revitalizing all corners of the DC Universe, from superhero antics to experimental horror to wartime realism, and creating such unforgettable characters as Etrigan the Demon and OMAC. This volume pulls together more than 1,400 pages of these "other" Kirby comics from the 1970s and 1980s, featuring the Demon, the Sandman, the Losers and more! Collects stories from In the Days of the Mob #1-2, Spirit World #1, Weird Mystery Tales #1-3, The Demon#1-16, The Sandman #1-6, OMAC #1-8, Our Fighting Forces #151-162, Super Powers (Vol. 1) #1-5, Super Powers (Vol. 2) #1-6 and many more! 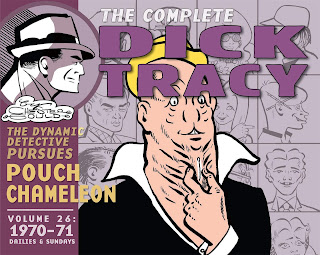 Complete Chester Gould's Dick Tracy Volume 26
Having returned to policing duty on Planet Earth, former Space Sheriff Tracy finds a world markedly changed from the one he left. Feeling handcuffed by expanded legal protections afforded suspects and stricter guidelines of evidence, Tracy all but begs bad guys to shoot first, and he may get his wish, thanks to nemeses such as explosion-crazed Jonny Scorn, the hand-grenade toting revolutionary called El Tigress, and the aptly-named Dope King, in a story that features Tracy's most direct assault on drug traffickers, coinciding with Richard Nixon's "War on Drugs!"These early '70s adventures also see the dauntless detective facing off against one of the strip's best late-era grotesque villains: Pouch, who uses a repulsive hidden flap in his neck to hide anything from stolen diamonds to automatic pistols. The plot also features a rare return by an earlier villain, as the Mole is released from prison after serving nineteen years, only to learn his granddaughter, Molene, is part of Pouch's gang! All this, plus: Tracy grows a mustache, Groovy seems to fall for a certain long-legged policewoman, and Gravel Gertie tries to figure out the mysterious link between the world's oldest tattoo artist and a million dollars in missing gems. Finally, an attempted burglary of rare metals from Diet Smith's plant introduces Peanut Butter, the smartest kid in the strip since Brilliant, the inventor of the Two-Way Wrist Radio. Volume 26 reprints all dailies and Sundays from December 24, 1970 to September 27, 1972. 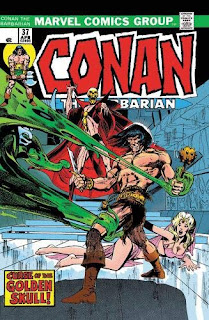 Conan the Barbarian: The Original Marvel Years Omnibus Vol. 2
The legend of Conan continues! Tired of the thieving life, Conan signs on as a mercenary for the warring kingdom of Turan. The enemy will tell of Conan's legendary skill in battle - if any of them live to tell the tale - but palace intrigue may prove more dangerous to the barbarian. After all, it's never wise to bed a wizard's woman. Then, Conan joins with Red Sonja for a multipart adventure. Last, but far from least, we present Roy Thomas and Gil Kane's never-before-reprinted GIANT-SIZE adaptation of "The Hour of the Dragon," the iconic story of how Conan became king and conqueror and met the woman who would become his wife. And it's all restored to the original coloring!COLLECTING: CONAN THE BARBARIAN (1970) 27-51, ANNUAL (1973) 1, GIANT-SIZE CONAN (1974) 1-4 AND MATERIAL FROM SAVAGE SWORD OF CONAN (1974) 1, 8 AND 10
at July 24, 2019