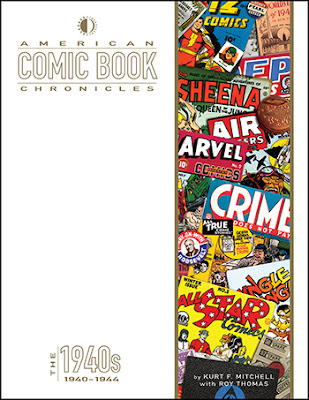 The Sixties were nothing to sneeze at, but when it comes to American comic books, the Forties were the biggest decade of all.

After Superman and Batman socked open the floodgates in 1939, America's corner shops and grocery stores were inundated with a flood of colorfully clad heroes with seemingly more and more of them always on the way.

From DC (then known as National, which also soon swallowed up All-American Publications), you had not just the World's Finest duo, but also Wonder Woman, the Flash, Green Lantern, Green Arrow, Hawkman, the Atom, the Spectre and more.

From Marvel (then doing business as Timely Comics) you had Captain America along with fire/water sparring partners the Human Torch and Sub-Mariner.

And over at Fawcett, you had the biggest-selling hero of all: Captain Marvel.

Plus, from all over the place, you had a whole range of other heroes - some great, some terrible: Blue Bolt, the Shield, the Fox, the Green Llama (for real!), etc., etc., etc.

And that's not mention other genres (yes, there were once other genres): Westerns, jungle adventure, sci-fi, funny animals and teen humor (a kid named Archie made his debut in 1941). All in color for dime.

So it's no wonder TwoMorrows is covering this storied decade over two - not just one - volumes in its excellent "American Comic Book Chronicles" series.

This first installment, penned by Kurt F. Mitchell in consultation with the famed Roy Thomas (who knows a thing or two about comics of the Forties. Don't get him started on the Justice Society), is excellent.

Mitchell's writing is clear and engaging and his scholarship robust. He does a great job of setting the stage, detailing where America was as the decade began - just recovering from the depression with a war on the way. Comic books, along with the aforementioned movies, serials, radio shows and more,  provided a lively distraction from it all. The book chronicles the gamut, from great comics and innovative creators to the crap and the hacks.

The decade saw the debut of masterful visual storytellers who became giants in the field: Jack Kirby, Will Eisner (yes, we're counting his Spirit strip as a comic book), Jack Cole, Reed Crandall, Mort Meskin, Mac Raboy, C.C. Beck, H.G. Peter and Carl Barks. But the book also makes mention of oddball creators of the day such as Basil Wolverton and the bizarre Fletcher Hanks, who'd like be classified an "outsider artist" if he were around today.

Examples of these and other creators is found throughout the book, which reproduces hundreds of comics covers and art pages - it's a joy to browse.

The emerging war, and America's involvement in it, is a constant, unavoidable part of the narrative throughout the book. By 1941 and 1942, domestic gangsters start to get sidelined as villains; our heroes are now too busy fighting the Axis threat. Jack Kirby's unforgettable over to Captain America #1 depicts the star-spangled warrior punching Hitler right in the face. Violent, yes, but such comics and images emboldened young Americans and fired them up to defend what's right.

Unfortunately, the war also sidelined many top creators for a number of years. Kirby was drafted and ended up fighting real Nazis in Europe, nearly freezing off his feet in the process. Eisner also served in the military, using comics in a new way to teach soldiers how to maintain equipment. A young writer/editor at Timely named Stan Lee was drafted, too, working in the Army's film training division. Part two will presumably cover the return of those creators and others following the war and their continued creative development, which saw the rise of the romance, crime and monster comics that ruled the Fifties (an era already covered in TwoMorrows' series).

This is a vital chunk of comics history, extremely well-captured. You can order it here.
at August 29, 2019