Coming Up: "Psurroundabout Ride" by XTC (as the Dukes of Stratosphear) 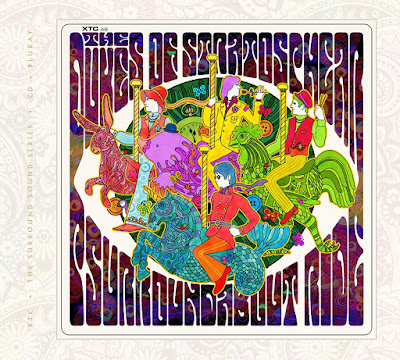 Out Oct 18. Order from Amazon now.


XTC as The Dukes - From Psychedelic Pswindon - the complete recordings in stereo and 5.1 Psurround Psound / 25 o Clock and Psonic Psunspot newly mixed in stereo by Steven Wilson, with mixes approved by Andy Partridge (CD & Blu-Ray) / Both albums + 2 extra tracks also newly mixed in 5.1 surround by Steven Wilson on Blu-Ray (with a final song up-mixed to surround using the Penteo audio system) / All 19 songs appear in their original mixes in hi-res stereo (Blu-Ray) / 18 songs appear in their new mixes in hi-res stereo (Blu-Ray)] / Complete demos from both albums & instrumental versions of album songs also feature in hi-res stereo on the Blu-Ray. Produced by John Leckie (Swami Anand Nagara) and The Dukes.

Sometimes it pays to be a studio band... Between 1980 (when they were still performing live) and 1989, XTC wrote, recorded and released a series of albums from Black Sea to Oranges & Lemons that cemented the band's reputation as songwriters and recording artists almost without parallel in the UK. They may not have sold as many as some and they tended to sell more in Japan and America than on home soil. They may not be as famous as other bands of the era but, to many of those with discerning ears, they're rated among the very best, the select few who rise above their contemporaries...

As if six stellar albums in ten years including two double LPs, in an era when the advent of digital technology and CDs left many artists struggling to issue one or two albums in the same period, wasn't enough, the band also issued two albums under completely different names as The Dukes of Stratosphear, an unashamedly psychedelic ensemble which phased and flanged in and out of existence in 1985 and 1987 respectively... (Though rumours continue to circulate of an earlier proto Merseybeat/Brit Blues incarnation of the band under yet another name..)

Psurroundabout Ride gathers all of the Dukes' material, with both albums remixed in stereo and 5.1 surround by Steven Wilson and mixes approved by Andy Partridge. No need for mushrooms, simply position yourself between 6 speakers, play the blu-ray, relax and float downstream, as the music takes you to places un-imagined, even in the original summer of love...

2. Bike Ride to the Moon

6. The Mole from the Ministry

9. Have You Seen Jackie?

11. You're a Good Man Albert Brown (Curse You Red Barrel)

3. Bike Ride to the Moon

7. The Mole from the Ministry

12. You're a Good Man Albert Brown (Curse You Red Barrel)

26. No One at Home (Vanishing Girl Demo)

Email ThisBlogThis!Share to TwitterShare to FacebookShare to Pinterest
Labels: coming up, XTC