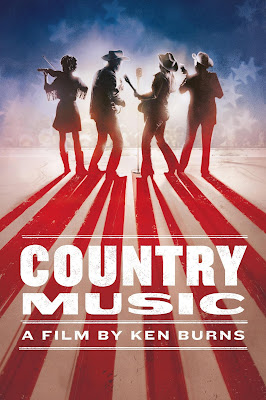 Ken Burns' "Country Music." I finally finished streaming my way through Ken Burns' most recent portrait of America, this one through the lens of country music from its beginnings to the present.

As with most of Burns' documentaries, it's mostly well done with lots of great old photos and clips - and a few egregious flaws.

The flaws? Well, for starters, there's no discussion of "Hee Haw," the hugely popular syndicated show that, for most Americans, was THE face of country music from the late 60s through the 1970s. Noting this, along with the fact that many country musicians and fans hated the show because it presented a derogatory and stereotyped view of the genre and of rural life, would've contributed valuable perspective to why many Americans still see country music as the soundtrack of bumpkins, not as real art or music, which it most certainly is - or, at least, can be.

Also, no discussion of of Glen Campbell, one of the genre's biggest crossover stars, who also had a TV show in the late 1960s and early 1970s that was country's other major face to the world.

And, finally, what's Wynton Marsalis doing here? Yes, Burns' including him in his jazz documentary made sense, even though Marsalis was way overused there. But including him here makes no sense at all. Not only is Marsalis not a country musician (although he's performed with Willie Nelson) he's possibly the most narrow-minded musician of all time. His jazz policing of the 1980s, during which he disparaged his more progressive elders non-stop, ruined careers and led to a forgotten generation of musicians who created far more interesting music than the corporate-delivered frozen-in-time hard bop he purveyed. And here he's supposed to be the guy with open ears. Just weird.

Nearly as weird is the inclusion of Darius "Hootie" Rucker who also once performed with Willie Nelson. But why is he here? Just because he's a familiar face? It's dumb. He certainly doesn't come across as an expert and offers nothing in terms of insight.

But, like I said, there are still lots of great old photos and many great musical clips.

If you're a person interested in learning more about country, the series may expose you to artists and songs you didn't know and it will give you a basic history of the genre. But it's imperfect and only the beginning of your journey.

UPDATE: From the comments section - sounds like some "Hee Haw" discussion must've slipped by me. Apologies to moptop Ken. I'll need to go back and look. Stand by the rest of this though! In particular, the commentators. Marsalis and Rucker are odd choices when there are so many other possibilities. Marty Stuart and the other genuine country musicians featured as commentators were great, and we're fortunate that Merle Haggard was interviewed before his passing. I wonder if they tried getting Tyler Mahan Coe, whose excellent Cocaine and Rhinestones podcast present an excellent history of country music - better than Burns'! 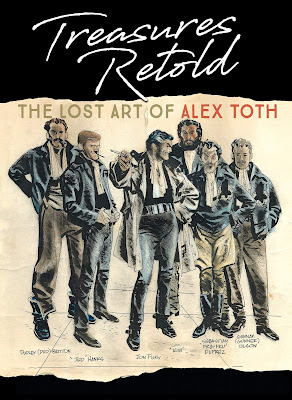 Treasures Retold: The Lost Art of Alex Toth. After three huge picture-packed volumes recounting the life, comics and animation work of the brilliant Alex Toth, IDW follows up with a huge supplementary collection of rare Toth works - both from his years in comics and his later days working as character designer and storyboarder for Hanna-Barbera.

As you might expect - given that we're talking about Toth - it's all beautiful stuff. The comics work - in black-and-white and color spans genres, from romance and sci-fi to suspense and high adventure. There are two long film adaptations, which are a wonder to behold. This is an artist who loved aircraft and it shows in his beautiful scenes of planes in flight. Somehow, he makes the rotors of helicopters appear like they're in motion. He was a master of the form.

The book is a real grab-bag - in the best possible sense of the phrase. Along with character designs for "The Herculoids" and some storyboards near the back of the book, there are also some rare promotional/educational pieces on the history of flight and...the history of milk! Who but Toth (except maybe Jack Kirby or Will Eisner) could make something like that beautiful and interesting?

This isn't the place to start if you want more Toth on your bookshelf (I'd go with the other three books first) but it's a glorious addition, beautifully presented (although the type is a little small, and I don't think it's just because I'm getting older). Highly recommended.
at October 10, 2019