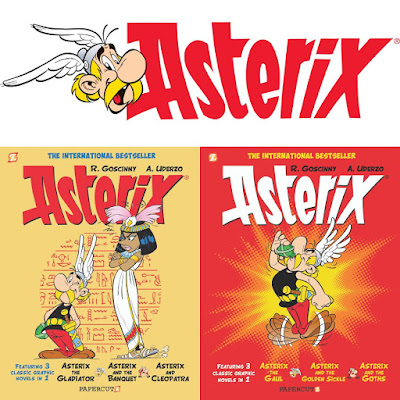 The beloved (by me, especially, and, I imagine, many of you) Asterix series has long been in print in English and relatively easily available in the U.S., but it looks like we'll soon be seeing much more of the feisty little Gaul and his friends stateside.

Papercutz, has announced plans to publish the first 38 books in the series in newly translated editions starting in May.

Via The New York Times:


Terry Nantier, the publisher of Papercutz, said the translations were a chance to revise the text for an American audience. He noted that previous English versions — printed and distributed in Britain by Orion Books, a division of Hachette, and sold in the United States — were “very good translations,” but were more British.

The United States editions will be released in May with Asterix Omnibus 1 and 2 — each reprints of three volumes of the original French comics. The 160-page omnibuses will be available in hardcover ($22.99, list price) and softcover ($14.99, list price). At the same time, Papercutz will also release a 48-page translated edition of Asterix Volume 38: The Chieftain’s Daughter in a hardcover ($9.99) edition.

...When Volume 39 is set to publish — sometime in 2021 — Papercutz will release its English translation simultaneously.

I'm not sure how I feel about new translations. I'm fond of the "British" versions I grew up with. But, if they're done well and they expose more people to these great comics, that's fine - I guess. I am hopeful there won't be any changes to content, however, for the sake of modernizing or political correctness. The original works should be presented without change, apart from translating the text from French into English. Needless to say, I'm holding onto my originals!
at November 08, 2019

Email ThisBlogThis!Share to TwitterShare to FacebookShare to Pinterest
Labels: Asterix