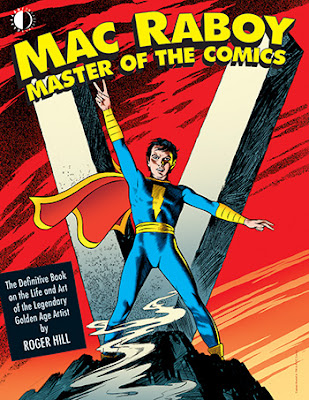 The saying goes "quality not quantity," but that's not necessarily so. Some of the best artists in comics were also among the most prolific.

Jack Kirby, for example, could turn out three blockbusting pages a day. And he wasn't just drawing. He was plotting the stories and essentially creating the Marvel Universe at the same time.

Mac Raboy, meanwhile, could reportedly spend an entire day penciling, erasing and re-penciling one panel of a single page. Granted, they were really nice panels! But the guy was slooow and a perfectionist. That's the testament of nearly every peer of his interviewed by Roger Hill for this beautiful new book.

Raboy is likely best-known for his Golden Age work on Captain Marvel Jr. and his long run, from 1948 to 1967, on the Flash Gordon Sunday strip. He was an incredibly talented draftsman, one of those guys who could paint with a pencil. His faces and figure work were gorgeous, and clearly his true love. As Hill reports, some of his peers in comics complained that Raboy didn't like illustrating action, which, obviously, is the bread and butter of the superhero game. So, consequently, you get the sense that Raboy was one of those creators who, despite being supremely talented at what he did, didn't much enjoy doing it. Which is sad. Still, you'd never get that just from looking at the pictures.

What more do we learn about Raboy in this book? Not a heckuva lot. He was a quiet guy who didn't socialize much with his work peers. We don't get too much more information about his personal life or personality, but that's not for lack of trying on Hill's part. He includes interviews with several of Raboy's assistants and has done a great deal of research. He also interviewed the artist's son. But, for all of that, Raboy, the man, still emerges as a bit of a mystery.

Fortunately, there's a great deal of wonderfully selected and, often, rare art on display here, too. Included are some beautiful woodcuts Raboy did for the WPA during the Depression and, of course, lots of his comics work. The book is nicely written and designed, with excellent reproduction. You can order it via TwoMorrows Publishing now.
at December 04, 2019