German-based Bear Family Records is one of the world's best reissue labels. For decades now, they've issued both single CDs and expensive, behemoth box sets specializing, mostly, in vintage U.S. country, pop and rock'n'roll. And, over the past few years, they've been issuing great Christmas compilations featuring tunes culled from those larger collections.

I've been keeping up with these releases and plan on getting both of these, too. If they're anything like their predecessors, the sound and liner notes are great (and in English) and the price is right (cheap). Groovy cover art, too.

Check 'em out. Click the links to order from Amazon. The details on each release come from the label. 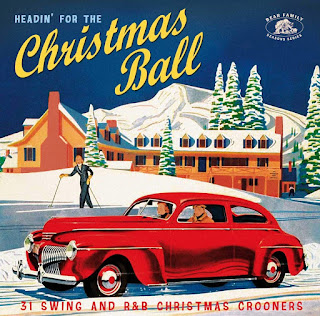 Headin' For The Christmas Ball: 31 Swing And R&B Christmas Crooners

Nostalgic Christmas with 31 Lindy Hop-Jitterbug-Boogie-Jive and Easy Listening rarities of the years 1940-1967!

Among them the title song Christmas Ball, as well as the B-side of the rare 1951 Coral single of the Georgie Auld Orchestra with the great singer Bill Darnel, never before on CD!

Knuckles O'Toole & The Brigadiers' version of Jingle Bells is also included, as well as New Year's goose bumps classic Auld Lang Syne in the worn version by Guy Lombardo, and the famous version of the classic Sleigh Ride in the interpretation of orchestra leader Leroy Anderson, also known from the movie 'Polar Express'!

They are joined by Jerry Lewis, Cary Grant and Mickey Rooney, three movie stars from Hollywood's golden era with their really rare recordings!

With this compilation we want to give more exuberance to the celebration of love, although some of the songs are nostalgic and dreamy and you might even feel transported back to your own childhood. This Christmas disc invites you to the Christmas ball, to dancing, to swinging, to contemplation and cheerfulness among family members, friends, like-minded people and guests. This music brings glamour into every hut, with all the candles, lights and crackling stoves, while outside it is snowing and stormy... Of course, the CD also comes with liner notes for each song, rare photos and many illustrations in the 24-page booklet! 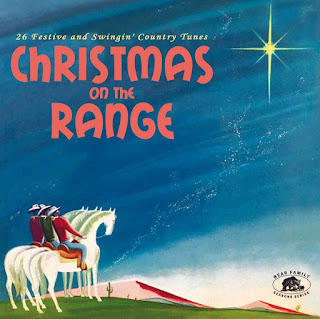 Christmas On The Range: 26 Festive And Swingin' Country Tunes
A great compilation of traditional country music, western swing and hillbilly.
26 songs selected by Nico Feuerbach and commented with great expertise and profound humour by Roland Heinrich.
Three tracks are released here on CD for the first time!
Bear Family also brings good cheer and will make your Christmas especially ''merry'' with an particularly compiled seasonal country CD. Bear Family's little sleigh stopper is not your average middle-of-the road cash in: Bear Family's 'Christmas On The Range' brings you vintage country music, western swing, and hillbilly from the 1940s and '50s. The stories are heartfelt and funny with just the right dose of Christmas corniness. The CD showcases well-known artists like Bill Monroe and Kitty Wells alongside obscurer colleagues such as Billy Briggs and Ray Salter & the Twin City Playboys. Also, three of the tracks included have never been available on CD.
This compilation helps you burn the extra cookie with hot dance tunes like The North Pole Boogie and the all-time great We Wanna See Santa Do the Mambo by Terry Fell. Bob Wills is presented in a pensive and patriotic mood with his World War II classic Empty Chair at the Christmas Table, whereas Brenda Lee roars determined that she is going to lasso Santa Claus! If you party too hard around Mardi Gras you might end up with a New Baby for Christmas - George Jones will let you in on the whole story. Traditional country music always loved to exploit special occasions by tackling any imaginable topic, no matter how trivial or exotic. This CD brings you great novelties, great tear jerkers, and great dance music. It also brings great joy!
Track List:
at December 01, 2020