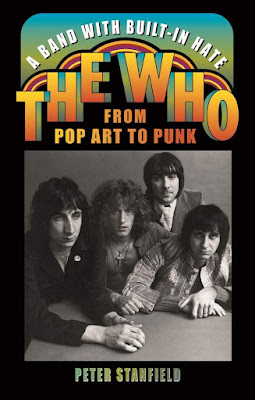 Out in March, "A Band with Built-In Hate: The Who from Pop Art to Punk" has collected some promising blurbs (see below). It's out March 22. I've always loved the band, especially the pre-"Tommy" singles era, but the hairy stuff is ok, too. I saw Pete and Rog with orchestra in Seattle before the world went to hell and it was great. Felt like I was 14 again. For codgers, they still give all they've got.

This book is a biography of the Who unlike any other. From their inception as the Detours in the mid-sixties, to the late seventies, post-Quadrophenia, the Who are pictured through the prism of pop art and the radical leveling of high and low culture that it brought about—a drama that was consciously and aggressively performed by the band.

Peter Stanfield lays down a path through the British pop revolution, its attitude and style, as it was uniquely embodied by the band: first, under the mentorship of arch-mod Peter Meaden, as they learned their trade in the pubs and halls of suburban London; and then with Kit Lambert and Chris Stamp, two aspiring filmmakers, at the very center of things in Soho.

Guided by the concerns of contemporary commentators—among them George Melly, Lawrence Alloway, and, most conspicuously, Nik Cohn—Stanfield tells the story of a band driven by fury, and of what happened when Pete Townshend, Roger Daltrey, Keith Moon, and John Entwistle moved from backroom stages to international arenas, from explosive 45s to expansive concept albums. Above all, he tells of how the Who confronted their lost youth as it was echoed in punk.

"With impressive eloquence, A Band with Built-in Hate situates '60s Britain's most volatile and incendiary group at the heart of pop's wild vortex, its sonic assaults on the class system and the cultural status quo. Stanfield digs brilliantly into the Who's transgressions, their upending of entertainment, their transmuting of pop music into art-rock and proto-punk. He can see for miles."

-- Barney Hoskyns, author of "Lowside of the Road: A Life of Tom Waits" and "Major Dudes: A Steely Dan Companion"

"The best book on the Who. Stanfield understands that they were built entirely around opposition—they didn’t want to be the Beatles or the Stones; they didn’t even want to be the Who most of the time. He smartly states the case for peak Who as transgressive, how their clashing obsessions with primitive rock’n’roll and sociological statements made them so exciting. He also wisely concentrates on their peak years, before pop solidified as rock, when the Who were the closest thing to pop art British music has ever produced."

Email ThisBlogThis!Share to TwitterShare to FacebookShare to Pinterest
Labels: The Who