Out now: "Ditko Shrugged: The Uncompromising Life of the Artist Behind Spider-Man" 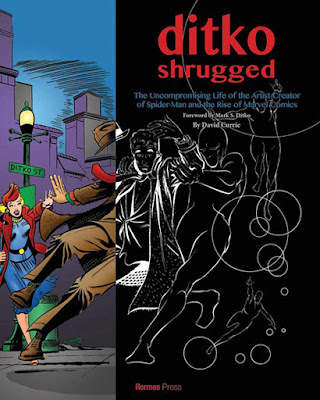 Available now from Amazon, 'Ditko Shrugged: The Uncompromising Life of the Artist Behind Spider-Man" is billed as the first in-depth of Steve Ditko, the artist who co-created Spider-Man and Doctor Strange among many other characters.

Steve Ditko was the last of a sturdy generation of American comic book artists who produced iconic, modern day mythology and was among the most influential and original creators of the 20th Century.

A prime architect, together with Jack Kirby and Stan Lee, of a universe of heroic characters that took Marvel Comics from an underdog New York publisher in the 1960s to the world-recognized brand of comic book superheroes and multi-million-dollar movies of today, Ditko co-created Spider-Man but walked away from the character he designed over 50 years ago, to never again return to the enduring superhero and retreating completely from the public eye thereafter.

Seeking his own individualistic paths for creative and personal expression would lead to condemnation from some, restricted work opportunities from others and a reclusive life peppered with memories of interfering editors; original artwork that had been stolen from him and a life-long adherence to his Objectivist convictions.

With the book sourcing a decade-long correspondence between Steve Ditko and its author David Currie, the history of the formative years of American comic books and the rise of Marvel Comics is revealed, illuminated further by interviews with many other comic book creators from all periods. It's an intrigue-filled story of heroes and villains, both fictional and real; visionary artists on zero-hour contracts and one man's artistically productive and diligently uncompromising life.