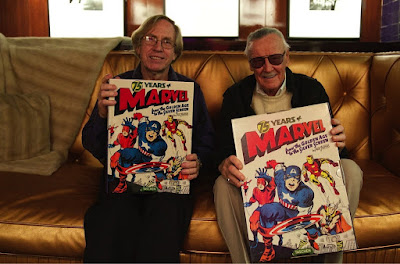 I have a lot of respect for Roy Thomas and am a longtime fan of comic book writing and his magazine, Alter-Ego. I also recognize that he's very much a Stan Lee partisan in the arguments over whether Stan or Jack Kirby should get the most credit for creating the Marvel Universe. So, I'm not surprised to see him penning this piece in the Hollywood Reporter giving us his take on the new biography "True Believer: The Rise and Fall of Stan Lee" by Abraham Riesman.

Not having known either Stan or Jack, I don't have a dog in the fight. But I do believe that Kirby deserves the same household name status that Stan enjoyed. I believe his character designs and plotting (or co-plotting) of classic Marvel tales earns him full co-creator status. But I also think it's wrong to diminish Stan's contributions in giving Marvel's characters personality and pathos via his dialogue, and for promoting the Marvel Universe as a thing. The plain truth is, none of it would've happened without both of them. Not to mention Steve Ditko...

At any rate, Roy's piece is certainly worth a read if you are a fan at all of Marvel's comic book past. (And, if you aren't, why are you here?!)

If you slice and dice the more-than-occasional bits of unhealthy fat off Riesman's book — the places where he goes off on unsupported flights of fancy to declare on his own recognizance that "Kirby … may well have been the sole creator of the whole kit and caboodle" of Marvel concepts and characters — you wind up with a book that could be a welcome, even major addition to the handful of Stan Lee biographies written to date.

But, no matter how well the Random House publicity machine manages to hype this book, as long as it stands as currently published, with Stan all but written off as an inveterate liar whose most important creation was his public persona (when it was actually the concept and direction of the Marvel Universe, an idea that was anathema to Jack Kirby, as per in-book quotes), it will remain undeserving of the high praise heaped upon it by people who, for the most part, don't really know what the hell they're talking about.