Asterix is coming to Netflix! 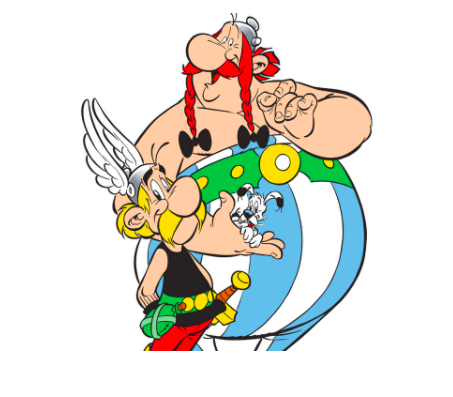 Netflix actually sounds like the name of an Asterix character...

This is cool news - The long-running comics character that's a household name in nearly every nation but our own (I'm looking you 'merica!) is heading our way in an animated series.

Here are details released to the media from Netflix's Director of Original Animation Dominique Bazay:

I'm excited to announce that Netflix and France's leading publisher are teaming up to present Asterix, an iconic figure of French popular culture, to a new generation of worldwide viewers. We're partnering with Hachette's Les Editions Albert René to create the first-ever animated limited series based on the timeless classic. Renowned French auteur and playwright Alain Chabat will direct and Alain Goldman (Legende Films) will produce.

Alain Chabat is no stranger to this iconic property. He wrote and directed 2002's Mission Cléopâtre,' the most successful of Asterix's numerous appearances on screen and the third highest-grossing feature film in French history. I'm thrilled that Alain Chabat is coming back to Asterix for the first time since then, and that it's on Netflix. The series will debut in 2023.

I have been talking with Celeste Surugue at Albert Rene for years about how to bring Asterix to Netflix. We built a great relationship of trust and mutual respect around our love for these characters.

I'm French Canadian, and like most francophones around the world, I grew up with Asterix, his sidekick Obelix and loyal companion Dogmatix. I watched the animated specials and read the books religiously. If you'd told the 8-year-old me that one day I'd help bring these characters to life... I wouldn't have believed you!

Since the first Asterix graphic novel was introduced in 1961, 38 volumes have been released in 111 languages and dialects, with the 39th due later this year. (And there have also been 15 feature films dating back to 1967.) These stories tell the saga of the pugnacious warrior and his irreverent village companions who keep a tiny corner of ancient Gaul free from bumbling Roman invaders. Each new volume and movie is eagerly awaited by fans, especially in France, Italy, Germany and Canada. I've always felt the unique tone of Goscinny and Uderzo's humor is timeless. It's why Asterix is so special - it appeals to all ages and crosses all borders.

Our series will be adapted from one of the classic volumes, Asterix and the Big Fight, where the Romans, after being constantly embarrassed by Asterix and his village cohorts, organize a brawl between rival Gaulish chiefs and try to fix the result by kidnapping a druid along with his much-needed magic potion. I'm not giving anything away when I tell you, it doesn't go as planned.

I'm excited to introduce Asterix, Obelix and Dogmatix to a whole new generation of fans around the world.

Email ThisBlogThis!Share to TwitterShare to FacebookShare to Pinterest
Labels: Asterix