Out March 12: The J.B’s: Food For Thought / Doing It To Death / Damn Right I Am Somebody 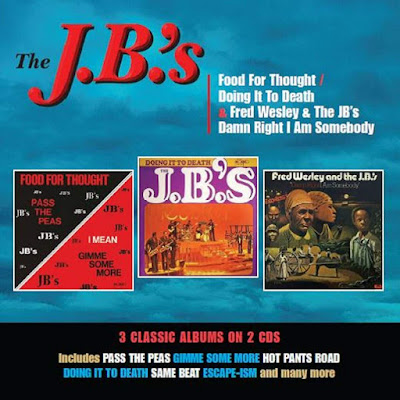 Available for pre-order now from Amazon.

Robinsongs has great pleasure to bring you what must have been the World’s funkiest Band, and the Godfather Of Soul the legendary James Brown’s backing band The J.B.’s albums “Food For Thought”, “Doing It To Death” & “Damn Right I Am Somebody” in one double CD package.

Featuring some of the classic Funk Anthems such as ‘Gimme Some More’, ‘Pass The Peas’, ‘Hot Pants Road’ and the Number 1 R&B single ‘Doing It To Death’.

These albums were produced by James Brown, and although there are a few instrumentals like the mesmerising ‘Theme From King Heroin’, James Brown’s vocals are prominent and tracks such as ‘Escape-ism’ and ‘More Peas’ make you feel like you are also listening to a classic James Brown album.

But James is not the only well-known player on these albums, they also feature Fred Wesley, Maceo Parker, William (Bootsy) Collins, Bobby Byrd and the backbeat supreme Clyde (The Funky Drummer) Stubblefield are all out front as well as many other famous J.B.’s.

The “Damn Right I Am Somebody” album gave Fred Wesley lead billing as Band leader and the album was recorded during the same session as James Brown “The Payback” album, and you can tell as the album has a similar vibe. As the original album cover stated Think That You Are Somebody And You’ll Be Somebody – Positive Thinking.

This Double CD has fantastic sleeve notes that were written by Charles Waring contributor to MOJO & Record Collector.

DOIN IT TO DEATH

14. YOU CAN HAVE YOUR WATERGATE, JUST GIVE ME SOME BUCK

17. YOU CAN HAVE YOUR WATERGATE JUST GIVE ME SOME BUCK

19. YOU CAN HAVE YOUR WATERGATE, JUST GIVE ME SOME BUCK

DAMN RIGHT I AM SOMEBODY – FRED WESLEY & THE JB’s

7. GOING TO GET A THRILL

8. YOU SURE LOVE TO BALL