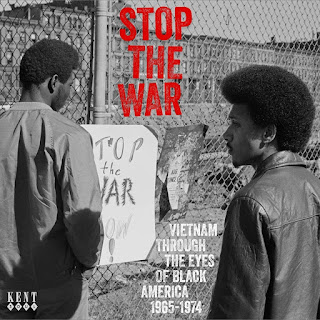 Out June 4 from Kent Records. Order from Amazon.

This month sees the release of the last in Kent’s trilogy spotlighting black America’s involvement in the Vietnam war. It’s been a long wait but we feel that the 23 tracks here more than uphold the high standard of its predecessors – “A Soldier’s Sad Story” (CDKEND 226) and “Does Anybody Know I’m Here” (CDKEND 245).

Presented in loosely chronological sequence, “Stop The War” contains many highly significant musical statements on various aspects of the conflict, from shipping out to coming home. Even though the Vietnam war has been over for almost half a century it’s still possible, through these songs, to feel the frustration, anger and sadness that many Americans felt towards a conflict that lasted far too long and claimed far too many lives on both sides.

Featured artists include major names such as Marvin Gaye, the Impressions, Dionne Warwick, William Bell, and the Staple Singers alongside lesser known but equally worthy contributors including Michael Lizzmore, the Pace Setters, Charles Smith & Jeff Cooper and Artie Golden, all of whom have something important to add to the story. The vast majority of these tracks have not previously appeared on Kent, and several make their CD debut here.

Annotated and illustrated as copiously as you would expect a prestige Kent project to be, “Stop The War” is a fitting and forthright finale to a trilogy that has been extremely gratifying to bring you. We are confident that demand and acclaim for this one will be as strong as it was for the previous two volumes.