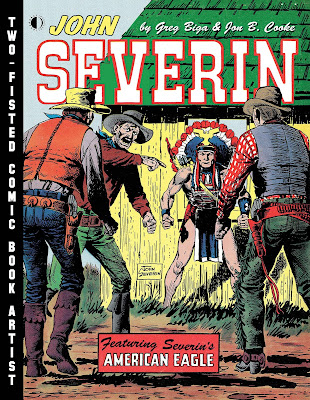 Due out from TwoMorrows Publishing on Dec. 14. Order now from Amazon.

The definitive biography of one of the most prolific creators in the history of American comics! From a start in 1947 at the Simon & Kirby shop, he co-created the legendary Western strip American Eagle with Will Elder, and became an EC Comics mainstay, working with Harvey Kurtzman on Mad and Two-Fisted Tales. In addition to a 40+ year association with Cracked magazine, his pivotal Marvel Comics work included an extended run inking Herb Trimpe on The Hulk, and teaming with sister Marie Severin to create the classic comics version of King Kull. Throughout his storied career, he freelanced for every major publisher, and remained a workhorse up till his final Dark Horse mini-series at age 90. Included in this volume is a special "American Eagle" section, an eye-popping art gallery, and extensive personal photos and artifacts (including WWII "Victory Mail" cartoons and handmade greeting cards for his family). Also featured are commentary from over 25 peers gathered just for this book, including Neal Adams, Richard Corben, John Byrne, Russ Heath, Walter Simonson, and many others. Written by Greg Biga and multiple Eisner Award-winner Jon B. Cooke, with an introduction by Howard Chaykin, Foreword by Mort Todd, and Afterword by Chuck Dixon, this profusely illustrated book celebrates the centennial of the two-fisted artist's birth!