Details from the BBC:

Galaxy 4 (alternatively spelled Galaxy Four) is the mostly-missing first serial of the third season of Doctor Who, which originally aired in four weekly episodes from 11th September to 2nd October 1965.

Audio-only recordings of all four episodes have survived from this classic story, and have been used to create a brand new, fully animated story, filling the gaps alongside the original surviving Episode 3 and over five minutes of original footage from the otherwise lost Episode 4.

This two disc release gives fans the opportunity to enjoy the four new animated episodes of Galaxy Four in either color or black and white. The release will also include: 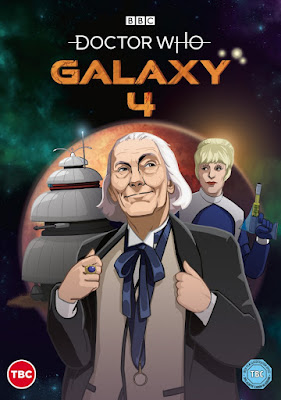