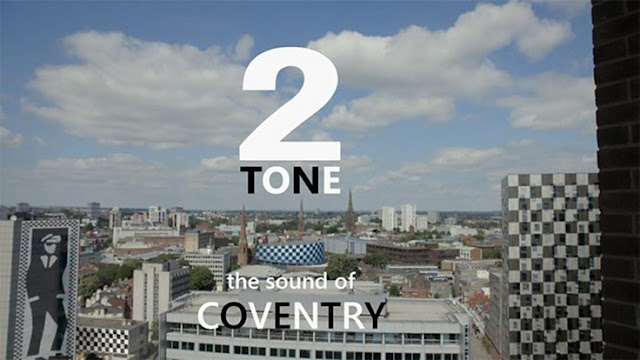 Details from the news release.

2 Tone: The Sound Of Coventry has been commissioned by BBC England and is a co-production between Coventry UK City of Culture Trust and Full Fat Television, and is part of the BBC’s commitment to the cultural celebrations in Coventry this year.

It will air on BBC One across the West Midlands on Thursday 30 September and later in the year on BBC Two across the UK. The documentary tells the story of 2 Tone, the musical phenomenon that exploded out of Coventry onto the music charts around the world in 1979.

Fans of 2 Tone will have a chance to apply for an exclusive screening of the film ahead of the broadcast, which will take place on September 28 at the Assembly Festival Gardens in the city. Audiences can apply for tickets by visiting the BBC Shows and Tours website.

This special hour long documentary takes a deep dive into the history of the 2 Tone movement. It features a rare interview with Jerry Dammers, founder of 2 Tone, revealing why he launched this “DIY” independent record label from Coventry and how he came up with the ideas for the music and the style. It’s a programme celebrating the sense of hope and pride felt in the city of Coventry at a time when there was growing racial tension across the UK. It blends personal testimonies with photos and archive footage – revealing the social and cultural significance of the music as well as the energy and fun of the live gigs and the fashion.

The film also charts the story of how 2 Tone went on to have a global impact and a unique place in popular music discovering bands and launching the careers of Madness and The Beat to name a few.

Aisling O’Connor, Head of TV Commissioning for BBC England says: “I grew up listening to The Specials and am a big fan of the vibrant music popularly known as 2 Tone. So I’m incredibly excited BBC England is part of telling this story. 2 Tone brought together black and white musicians and fans in a truly inspiring way. I’m proud that this programme allows us to play our part in supporting Coventry as it celebrates its multiculturalism, diversity and culture."

Chenine Bhathena, Creative Director for Coventry UK City of Culture Trust says: “2 Tone was created by a young Jerry Dammers, that gave birth to a global anti-racism movement. It was born in Coventry but was not just about music; this movement encompassed design, fashion, social justice and brought different racial communities together. 2 Tone stands for unity, peace and respect, joyful but with a strong social conscience. It successfully rallied to bring freedom for Nelson Mandela and to put an end to apartheid, and even today 2 Tone continues to inspire a new generation. We are proud of its Coventry roots and are delighted to be showcasing the music, the people and the social activism, during our year as UK City of Culture.”

Colette Foster, CEO of Full Fat Television says: “Being a lifelong fan of Ska, this documentary was a dream come true to make. The 2 Tone movement is an important part of Coventry’s history, and it’s so important to celebrate this movement and what it means to the city, in a time when Coventry is in the spotlight for its cultural diversity.”

You can watch 2 Tone: The Sound Of Coventry on BBC One in the West Midlands on 30 September at 8.00pm and nationally on BBC Two later in the year.