Coming up: "The Charlton Companion" coming from TwoMorrows Publishing 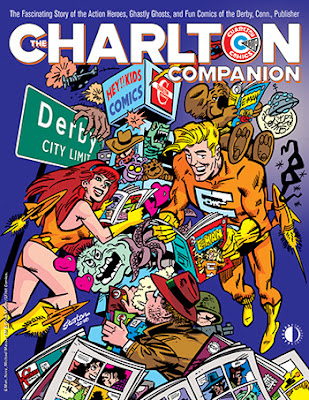 Out in October. Pre-order now from TwoMorrows.

An all-new definitive history of Connecticut’s notorious all-in-one comic book company! Often disparaged as a second-rate funny-book outfit, Charlton produced a vast array of titles that span from the 1940s Golden Age to the Bronze Age of the ’70s in many genres, from Hot Rods to Haunted Love.

The imprint experienced explosive bursts of creativity, most memorably the “Action Hero Line” edited by Dick Giordano in the 1960s, which featured the renowned talents of Steve Ditko and a stellar team of creators, as well as the unforgettable ’70s “Bullseye” era that spawned E-Man and Doomsday +1, all helmed by veteran masters and talented newcomers—and serving as a training ground for an entire generation of comics creators thriving in an environment of complete creative freedom.

Though it gave up the ghost over three decades ago, Charlton’s influence continues today with its Action Heroes serving as inspiration for Alan Moore’s cross-media graphic novel hit, Watchmen.

By Jon B. Cooke with Michael Ambrose & Frank Motler.