Another huge Bob Dylan set on the way - 1966 live recordings 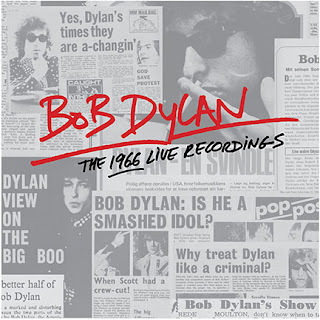 A year after the bonanza release of his full 1965-66 studio recordings, Bob Dylan is issuing a giant, 36-CD collection of 1966 live performances.

Bob Dylan: The 1966 Live Recordings is set for release Nov. 11. For those not in the mood or market for the Big Kahuna, you can also make do with the 2-CD Real Royal Albert Hall Concert. This recording features Dylan and the Band's May 26, 1966, in that London venue.

Bootlegs claiming to be the Albert Hall show, which included the infamous incident when a fan shouted "Judas!" at the gone-electric bard, where actually sourced from Dylan's performance at the Manchester Free Trade Hall from the same tour. The Manchester show was official released a few years ago as Volume 4 of Dylan's Bootleg Series as the in-quotes "Albert Hall Concert."

According to Mojo, the live collection:


... includes recordings made with the CBS mobile, plus soundboard and audience tapes. While the infamous Manchester Free Trade Hall show from May 17, 1966, has previously been released as volume 4 of Bob’s Bootleg series, and two other tracks – I Don’t Believe You (She Acts Like We Never Have Met) and Visions Of Johanna – appeared on 1985’s Biograph, a majority of these live sets have never been released, officially or otherwise.

Each individual disc will be housed in a sleeve featuring a still from D.A. Pennebaker’s landmark Dylan observational documentaries, Dont Look Back (1965) and Eat The Document (1966). Detailed sleeve notes for the project will be provided by esteemed Dylanographer Clinton Heylin.