Out July 7. Order now from Amazon. 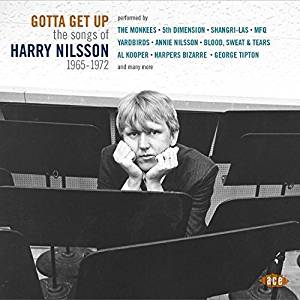 Bookended by his daughter Annie’s recording of the title track and Andy Williams’ version of ‘Remember (Christmas)’, this release in Ace Records’ highly regarded Songwriters series celebrates the one and only Harry Nilsson.

It’s one of the great paradoxes of contemporary pop music that Nilsson, one of the most talented and respected American songwriters of the 20th century, is primarily remembered for his stone classic recordings of two songs written by others: Fred Neil’s ‘Everybody’s Talkin’’ and Badfinger’s ‘Without You’. “Gotta Get Up!” aims to remedy that by spotlighting two-dozen Nilsson songs from the years 1965 to 1972, including several of which he made no official recordings.

Among the highlights are ‘Cuddly Toy’ and ‘Daddy’s Song’ performed by Nilsson champions the Monkees, Al Kooper’s harmony-filled recording of ‘Mournin’ Glory Story’, Canadian folkie Tom Northcott’s version of Nilsson’s autobiographical ‘1941’ and the MFQ’s Phil Spector-produced ‘This Could Be The Night’, one of Brian Wilson’s favourite records.

1. Gotta Get Up - Annie Nilsson

10. The Story of Rock and Roll - Collage

12. Hey Little Girl (Do Ya Wanna Get Married) - Jimmie Cross

15. Open Your Window - the 5th Dimension

17. I Said Goodbye to Me - the Glass Menagerie