If you're in New York this summer, check out "The Art of Spider-Man," runs through at the Society of Illustrators.

And if you can't make it, a catalog and other items are available from the museum's online gift shop. 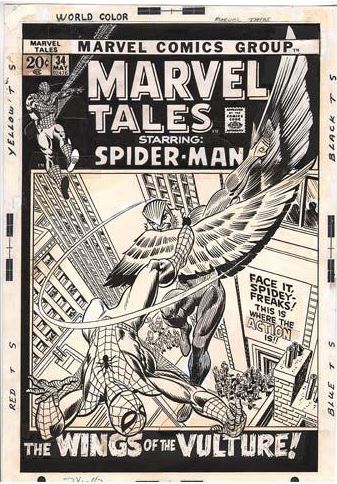 Spider-Man is the well- known signature character of the Marvel universe; created by Stan Lee and Steve Ditko at the nadir of the comics field in August of 1962 in the last issue of Amazing Fantasy #15. Fan reaction was promising and Lee decided to take a chance and published Spider-Man as a stand- alone comic. Unlike the fun, yet two dimensional super heroes of the 1930s and 40s, Lee scripted his new characters with flaws, insecurities, and nuanced personalities. These new style comics proved to be popular with fans, and readers as old as college age began to follow the exploits of these famed but flawed super heroes.
Ditko soon left Marvel and Spider-Man fans wondered who would take over his quirky and often awkwardly drawn hero. Enter artist John Romita. Romita, a graduate of Manhattan’s School of Industrial Art was already a veteran of comics and had worked in the industry since 1947. Overcoming his initial trepidation from taking over a strip that was drawn by the idiosyncratic Ditko, Romita soon ‘stopped trying to mimic Ditko’ and gave Spider-Man and his cast of characters his own warmer, friendlier, appealing and more elegant portrayal which would propel Spider-Man and his cast of well- known characters and villains to worldwide fame and multi-media acceptance as ‘the’ super hero symbol of the 'swinging ‘60s' pop culture. 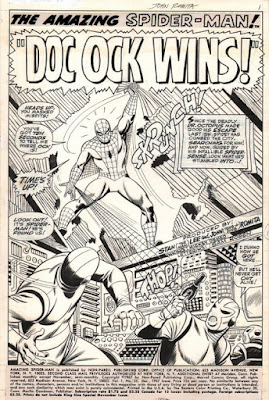 Romita’s lush and appealing artwork was also significant as his style soon became the blueprint for what would become the Marvel house look. Indeed, a few years later, in 1973, Romita would become the art director for the entire line of Marvel Comics. Romita’s impact on Marvel Comics in general and on Spider-Man in particular cannot be overstated; much like Walt Disney refined and nurtured a mouse and a house look into a powerhouse brand, Romita assisted Lee in doing much the same, Lee on the words, and Romita on the look of both the spider and the house line. No wonder Disney would acquire Marvel Comics some years later. Romita would be recognized for his contribution to his industry by being inducted into the Will Eisner Comic Book Hall of Fame in 2002.
This exhibition features art from throughout Romita’s initial Spider-Man run. Featured are ('twice up') pages from early in the run and their large size and clean presentation are a joy to behold. Significant pages are exhibited here for the first time, including Spider-Man’s battles with the Green Goblin, the Rhino, Doctor Octopus and many others. There are many pages featuring Romita’s beautiful presentation of Mary Jane Parker and Gwen Stacy, including the original early finished drawings. Also featured are the first 2 weeks of John Romita's amazing Spider-Man strip run as well as several of his earliest larger Sunday strips. There are select pages from Steve Ditko, the quirky creator who gave Spider-Man his oblique beginning with fantastic and detailed layouts and cinematic pacing.  Other featured Spider-Man artists will include Todd McFarlane who rebooted Spider-Man’s look in 1988 to much fan acclaim, and notable artists such as Ross Andru, John Buscema, Ron Frenz, Gil Kane, Keith Pollard, and John Romita Jr,  who all contributed their considerable talents in illustrating this iconic character.
The exhibition also includes rare art from the original Spider-Man newspaper strip, advertising and other illustrative work. It is the largest, and most comprehensive exhibition of Spider-Man art ever seen anywhere in the world.
The art is on loan from the collection of Spider-Man and Romita expert Mike Burkey, and the show is arranged and curated by Comic Art Specialist Rob Pistella.