Coming up: "Of All the Things," reissue of 1970s LP by Mamas and Papas singer Denny Doherty 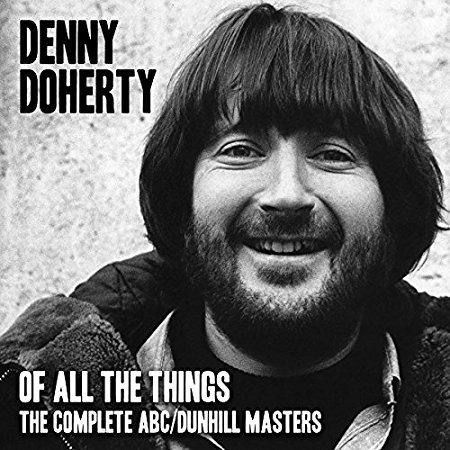 Out Friday. Order now from Amazon.


Almost to the day we released our The Mamas and The Papas: Complete Singles—50th Anniversary Collection back in January 2016, fans of the group (and they are legion!) started asking us about reissuing Papa Denny Doherty’s criminally overlooked 1971 solo album on the ABC/Dunhill label, Watcha Gonna Do.

This record came out on CD only in Japan back in 2002, and commands hundreds of dollars online, so  a straight reissue would have worked just fine.

But that’s not how we do things at Real Gone Music... and so we aren’t stopping with the album.
We’re adding six bonus tracks, five of ‘em previously unreleased, to fashion a brand-new compilation, Of All the Things—The Complete ABC/Dunhill Masters!

Arranged by Jimmie Haskell, produced by Bill Szymczyk, and featuring songs written by Denny with his first wife Linda Woodward with such session players as Barry McGuire, Buddy Emmons, Russ Kunkel, “Fast” Eddy Fischer, and Eric “The Doctor” Hord, Watcha Gonna Do is truly a lost gem of early ‘70s roots rock, sort of The Mamas and Papas meeting The Band and The Eagles (Szymczyk went on to produce all of The Eagles albums).

The bonus tracks include the rare single of the non-LP track “To Claudia on Thursday”—with additional vocals supplied by Spanky McFarlane of Spanky & Our Gang—plus five other tracks unearthed from both album session tapes and follow-up recordings left in the vaults.

Joe Marchese provides liner notes featuring quotes and reminiscences from Eddy Fischer, Denny’s daughters, Bill Szymczyk, Michelle Phillips, and others. Artwork includes previously unpublished period photographs. Remastered by Mike Milchner/Sonic Vision, this release is a must for any fan of The Mamas and The Papas and of that gorgeous Doherty tenor!