Review: "The Knowledge" by Squeeze 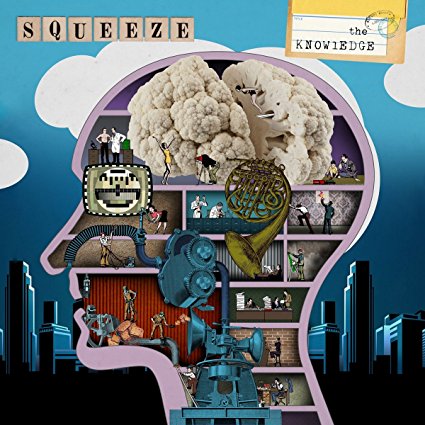 Squeeze is one of my few remaining "old friend" bands. Whey they release a new LP, my heart warms up a little. Pangs of nostalgia from all those high schools spins of East Side Story and Sweets from a Stranger set in (I wasn't cool enough to have got Argybargy or Cool for Cats when they first came out). And  expectations run, moderately, high.

I don't expect Squeeze today to match the heights of their best years. I'm amazed enough that the high-low harmonies of Glenn Tilbrook and Chris Difford still sound so good and that the tunes are still so melodic and upbeat.

On this basis alone, I'm glad that Difford and Tilbrook, several years back, started working together again under their old banner. They still create music that's wonderful to hear. Yet, I wish the music was just a tad more wonderful than it is.

The previous Squeeze album, 2015's Cradle to the Grave, included one fantastic tune, "Happy Days," that hearkens back to some of the band's best, catchiest work.

Yet, the rest of the tunes didn't take me in. I gave the LP the benefit of the doubt, though, because the songs were all written to accompany a British TV series of the same name, which we never had the opportunity to see over here in the States. Perhaps I just didn't have the right context.

But The Knowledge is a regular album, not tied to any outside project, and I still find it a little lackluster. Largely, I think, due to the lyrics. Most of the songs here take on the woes of the world and  the earnest concerns expressed in the words tend to crowd out the wit so central to the group's best music of the past.

In songs such as "A&E," about public health nurses not being paid enough, and "Rough Ride," about the lack of affordable housing and good-paying jobs for London millennials, the group expresses their middle-age, middle-class concerns so plainly and unimaginatively that they might as well be letters to the editor or Facebook posts. Better is "The Ones," which speaks to the polarization and anxieties of our times now that "the valves have been opened/the hot air released/a fear reignited/and the temperature increased."

Other misfires include the album's most overt attempt at humor, "Please Be Upstanding," which is about a problem many middl-aged men have that can be solved with a pill. It's sort of funny, but too obvious. And "The Final Score," about a man who is coming to terms over his childhood abuse by a soccer coach, seems to come from a different album entirely.

But the best songs on the album are those like "Innocence in Paradise," the nostalgic "Patchouli," and "Departure Lounge," which explore mortality and the quickly passing years we all share. And, while the line about "vaping" makes me cringe, I like "Albatross," a funny, tender portrait of an aging record collector and Peter Green-era Fleetwood Mac fan.

I doubt I'll return to The Knowledge much, but there are a few good tunes here worth a listen if you're a longtime Squeeze fan. Difford and Tilbrook haven't lost it, but they also haven't quite found it again. Here's hoping they'll keep writing and recording and slip back into the golden groove once again.