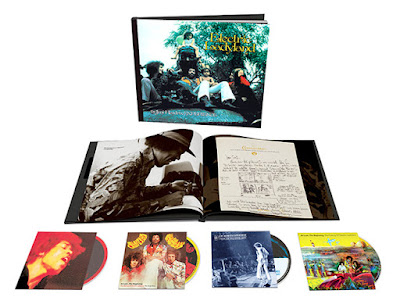 Out Nov. 9. Pre-order from Amazon now.

In celebration of the 50th anniversary of the release of The Jimi Hendrix Experience masterpiece Electric Ladyland, Experience Hendrix and Legacy Recordings present a special Deluxe Edition box set that gives the listener an amazingly intimate look into the making of the most fully realized, cohesive project of Hendrix's entire career.

Spread across 3 CDs and 1 Blu-ray the set includes CD1: the original album, now newly remastered by Bernie Grundman from the original analog tapes.

Electric Ladyland Deluxe Edition includes a full color, 48-page book containing Jimi's handwritten lyrics, poem and instructions to his record label, as well as never before published photos from the recording sessions that were shot by Eddie Kramer himself. All contained in a luxe casemade book with new cover art which is true to Hendrix's original vision of the album s cover: a Linda (McCartney) Eastman photograph of the band and children at the statue of Alice In Wonderland in New York's Central Park.

Email ThisBlogThis!Share to TwitterShare to FacebookShare to Pinterest
Labels: coming up, Jimi Hendrix