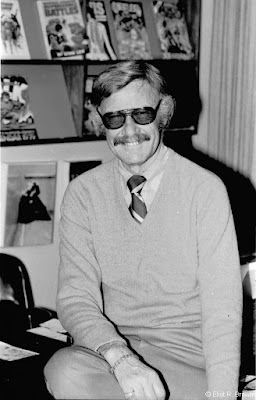 There were many, many articles and posts online this week about Stan Lee, who passed away, on Monday, at age 95. Below are links to some of the ones I found interesting. I'm sure there will be many, many more to come.

We'll start off with an obit from The Comics Journal, which does a nice job of detailing the mixed feelings many fans have regarding the Man:

It would be hard to overestimate Lee’s impact on the art, business and cultural image of comics. His noteworthy creative work emerged during a roughly 10-year period, but his comics career spanned more than 75 years — very nearly the life of the comics industry itself. During that time, atypical among comics creators, he had only one boss: Marvel (aka Timely and Atlas Comics). In the 1960s, Lee ignited and oversaw the greatest burst of creativity the superhero genre had seen since the invention of Superman. As Marvel’s editor-in-chief, he infused the line with a recognizable house style built upon the prolific Jack Kirby’s solidly dynamic art. As Marvel’s head writer, he created a world where super-heroic tropes stumbled ironically and engagingly among the petty details of everyday life. As Marvel’s spokesperson, he made readers feel they were part of an elite club and shepherded comics out of the kid-lit ghetto and onto college campuses.

But his willingness to toe the company line meant that his name and smiling face became corporate logos that were routinely stamped over the credits of other comics creators. Because his name became shorthand in the media for the multitude of creative efforts that had breathed life into the Marvel universe and because he allowed a “Stan Lee Presents” blurb to introduce even comics he had no involvement with, many in the fan community accused Lee of hogging the limelight and obscuring the work of Marvel artists.

His relationships with some of those artists, notably Kirby, soured into enduring animosity, but Lee himself rarely, if ever, expressed anger toward his co-creators in public. And more often than not, his colleagues described him as a generous and enthusiastic storyteller, often acting out plots in his offices, generating ideas even into his eighth decade.

And while he promises a longer, more-detailed piece later on, comics writer/historian Mark Evanier had this to say:

Stan was a very charming, friendly guy most of the time and he did lovely things like send little thank-you notes and if you showed him something you'd made — a drawing, a story, anything — he'd usually praise the heck out of it and make you feel like a star. Many, many people owed their careers to him and he was a great, witty interviewee — a skill most others around him lacked. You can apply any measure of weight to all that good will and gladhanding but it's certainly not nothing. He made a lot of people love him and I don't mean that in a bad way. Like all of us, he was a multi-faceted person even if he usually managed to show but one facet. The time will come when it's easier to talk about the others.

I think he was ready to go. But he was still talking about doing more cameos. As long as he had the energy for it and didn't have to travel, Stan was always up to do some more cameos. He got a kick out of those more than anything else.

He knew that readers of superhero comics wanted — needed — to see themselves in their pages, and if said readers were now teenagers, that meant that superheroes now had to reflect — had to radiate — teenage emotions. In place of joy, anger, sadness (the emotions of the elementary school playground) he imbued his heroes with angst, jealousy, depression, feelings of inadequacy (the emotions of the high school lunchroom and gymnasium).

They bickered. They wept. They felt crushing guilt. They fought giant cosmic battles while worrying about paying their rent.

As a result, they became a sensation.

So, we got "Bullpen Bulletins" and "Stan's Soapbox," and the Lee we most easily recognize throughout pop culture — bombastic, grinning, playfully combative, and even progressive — was born in those pages. That version of Stan was also born in the credits of this new wave of comics, where he would unabashedly praise himself and his cohorts as legends in their own time (while poking fun at good ol' Artie Simek) and grant everyone some kind of grandiose nickname.

On his watch, Marvel's creators became recognizable names that kids all over America grew to love and idolize (longtime Marvel creator Brian Michael Bendis gave this practice credit for jumpstarting his comics ambitions), and many of them became and remain larger than life icons. Actual tangible credit for comics creators is still an issue we wrestle with now, but from the perspective of fandom, that was huge.

Then there was the overall tone of the letters pages themselves. Stan didn't just want his readers to think his comics were good. He wanted them to think they were the best and only comics worth picking up, and "Make Mine Marvel" was born as a rallying cry. Yes, it was a shrewd marketing tactic designed to make money, but it also jumpstarted a sense of real direction and identity for Marvel readers, who in those early days became members of The Merry Marvel Marching Society. It was no longer just about picking up a comic on the stands because it looked neat. It was about who you were as a fan, what you cared about and why that really mattered. It started as something playful, but we can still the ripple effects of that kind of thinking now, and it didn't exist in superhero fandom in that form until Stan framed it that way.

Also from SyFy, how Stan used his soapbox as ... a soapbox! 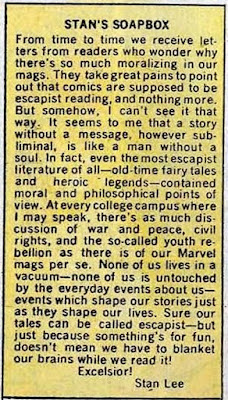 Via WogBlog: Stan Lee and the Beatles. 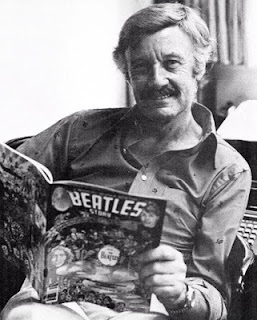 From the Comics Journal archives: Stan and DC Comics Publisher Jenette Kahn on a discussion panel at Temple University in 1979.

Lee and Kahn also disagreed on the amount of money comics writers make in comparison to writers in other fields. Lee felt they could make more by sheer volume of work. This caused Kahn to shoot him an unbelieving look, and he defended himself: “I was a comic book writer once so I should know.”

It's estimated Marvel's characters, many which Stan co-created with Jack Kirby or Steve Ditko, have generated $33,067,097,585.64 at the box office.