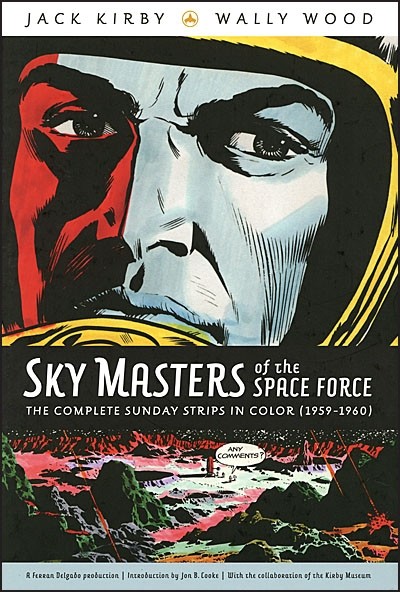 Talk about a labor of love. This first-ever complete collection of Jack Kirby's Sunday "Sky Masters" comic strips in color is truly a thing of beauty.

Spanish graphic designer Ferran Delgado spent literally years on the book, reproducing the art from the best sources he could find, whether they be printers proofs, published strips or color guides. The 54 full-page Sundays are printed in large format and are supplemented by additional material, including a detailed history of the strip, examples of the original artwork, Kirby's original color guides and 100 rare extra panels, which were discarded by most newspapers due to formatting considerations.

Inspired by the United States' fledgling steps into outer space, the short-lived "Sky Masters" strip was Kirby's most successful foray into newspaper strips, running first in daily installments starting in September 1958 and with Sunday strips added beginning in February 1959. Delgado also adds text pieces that detail some of the contemporary news stories and scientific developments that influenced the strip's storylines and artwork.

The teaming of these two giants of comics art is one of the things that makes "Sky Masters" so special. Wood did classic space-based stories on his own and the blending of his rich inks on various space hardware and moonscapes with Kirby's dynamic figures is spectacular. While Wally Wood gets equal billing on the cover here, it should be mentioned that only the first 22 Sundays feature his inks. The rest were inked by Dick Ayers, or Kirby on his own with assists from his wife, Roz. Kirby also wrote many of the later strips on his own.

While Kirby takes some imaginative leaps in putting man in space, and on the moon, ahead of actual events, the action is at a human level and based on emerging or envisioned technology. As a result, it's all fairly realistic. There are no aliens or ray guns, but, as he did throughout his career, Kirby does imagine a few things that eventually became reality, such as books with electronic displays. You could very well be reading this blog on such a device right now.

"Sky" Masters, the lead character here, and his colleagues on the Space Force (yes, Kirby invented that first, too) are an engaging bunch who interact in a lively way - not unlike the Challengers, or the Marvel heroes Kirby would create shortly after this strip's demise.

"Sky Masters" ended as a result of a lawsuit filed by DC editor Jack Schiff, who claimed he'd made the deal that led to the strip being produced and was not provided a percentage of the profits as promised. Kirby denied such a deal had been made, but Schiff prevailed, gaining a percentage interest in the strip. This led Kirby to quit producing "Sky Masters"in 1961 and to his departure from DC.ultimately, to the creation of the Fantastic Four, Incredible Hulk, Iron Man, Thor, the Avengers and more at Marvel with Stan Lee. In the long run, I'd say Kirby and comics fans alike came out the winners.

Copies of this English edition of Delgado's book are apparently hard to find now, unfortunately, and from his posts on the Collected Editions forums, it sounds like its very unlikely more will be published. I suggest snagging one now wherever, and however, you can. 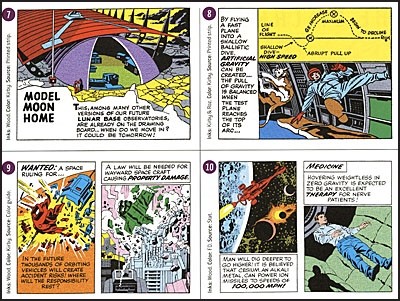 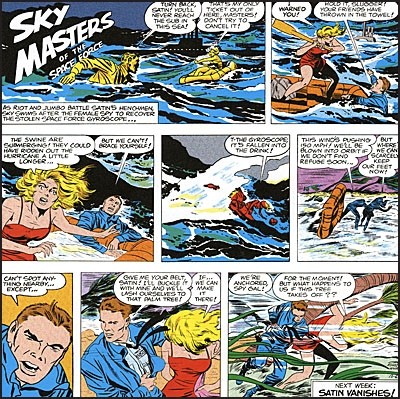 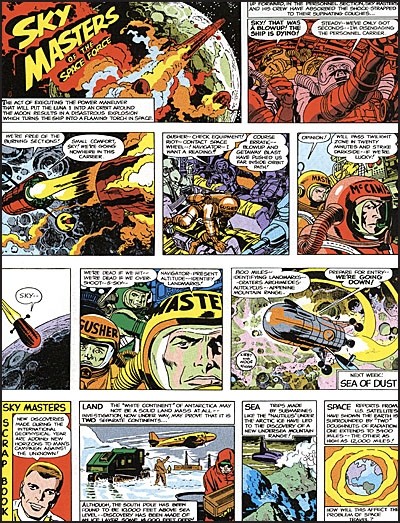 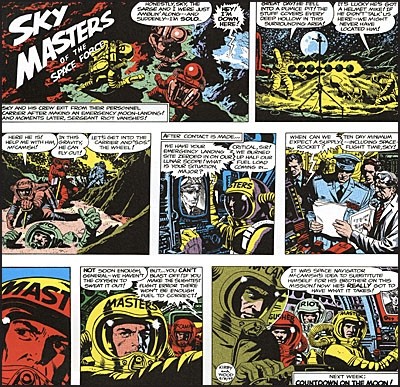