Our picks. Click the links to order items from Amazon. 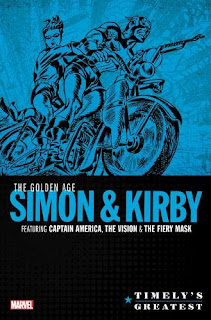 Timely's Greatest: The Golden Age Simon & Kirby Omnibus
Joe Simon and Jack Kirby entered the comic-book field separately and undoubtedly would have made major impacts on their own - but when their talents came together, it wasn't an impact, it was an earthquake. The Simon & Kirby team immediately became synonymous with innovative storytelling, powerful artwork and hit characters. They would birth some of the 1940s' most enduring creations, including the embodiment of a nation's fighting spirit: Captain America! This Omnibus collects Simon & Kirby's Timely Comics stories and covers, from the Vision to the Fiery Mask - and the rare Red Raven! Collecting material from DARING MYSTERY COMICS #1-3 and #6-8, RED RAVEN COMICS #1, MARVEL MYSTERY COMICS #12-25, HUMAN TORCH COMICS #2, CAPTAIN AMERICA COMICS #1-10, ALL-WINNERS COMICS (1941) #1-2, USA COMICS #1-3, YOUNG ALLIES COMICS #1 and MYSTIC COMICS (1941) #7. 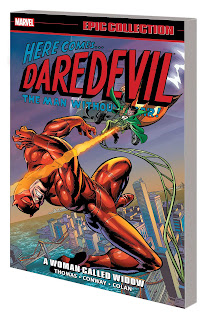 Daredevil Epic Collection: A Woman Called Widow
Daredevil heads out to the Left Coast in a quest to earn back the love of Karen Page - and L.A. has never been stranger! A cast of bizarre and action-packed enemies stands between DD and the woman he loves! Then, back in the Big Apple, Daredevil teams up with the Black Panther and joins forces with Iron Man and Nick Fury. And one of the greatest eras in the history of the Man Without Fear begins when Daredevil and Black Widow become partners! Together, they face Spider-Man, the Sub-Mariner, the Man-Bull, the Owl, the Scorpion and more. But drama and tension are brewing... With the Black Widow in Daredevil's life, what will become of Matt Murdock's relationship with the lovely Karen Page? Collecting DAREDEVIL (1964) #64-86 and IRON MAN (1968) #35-36. 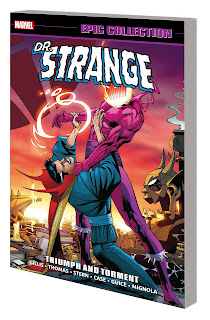 Doctor Strange Epic Collection: Triumph and Torment
The world believes Doctor Strange is dead - but he might soon be when Dormammu steals his body! Can Clea and Topaz help Strange regain control of his corporeal form? Then, the New Defenders return and Strange takes on a new apprentice: the other-dimensional Rintrah! But the Doc's soul is at stake when Baron Mordo strikes - and demon-lords Satannish and Mephisto make their move! NOW magazine makes Stephen its cover star - but what is his brother Victor's secret? And when the Acts of Vengeance erupt, Strange and Clea must face the Hobgoblin, the Enchantress and Arkon! Plus, in a graphic novel classic illustrated by Mike Mignola, Doctor Strange joins Doctor Doom on a journey into Hell! Collecting DOCTOR STRANGE, SORCERER SUPREME (1988) #1-13 and MARVEL GRAPHIC NOVEL: DOCTOR STRANGE AND DOCTOR DOOM - TRIUMPH AND TORMENT. 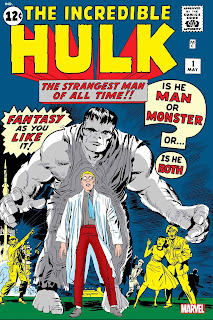 Incredible Hulk #1 Facsimile Edition
Meet the Incredible Hulk - for the first time! Re-experience the landmark issue that introduced the strangest being of all: Is he man or monster...or is he both? When puny scientist Bruce Banner's gamma bomb experiment is interrupted by young Rick Jones, Banner charges onto the test site to rescue the reckless teen - and ends up caught in the blast! When the sun falls, a hulking new form rises - with gray skin, not green! A weakling no longer, the world is his - for he is the Hulk! But who, or what, is the Gargoyle? What are his plans for this newly-minted monster? And will it be the Hulk, or Bruce Banner, who triumphs over this Iron Curtain evil? It's one of the all-time great Marvel comic books, boldly re-presented in its original form, ads and all! Reprinting INCREDIBLE HULK (1962) #1. 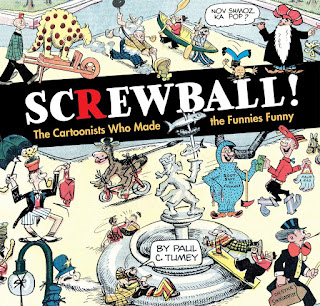 Screwball! The Cartoonists Who Made the Funnies Funny
Before "screwball" became a movie genre, it was a staple of other forms of American culture, including newspaper comic strips. Emerging from the pressures of a rapidly accelerating technological and information-drenched society, screwball comics offered a healthy dose of laughter and perspective. The disruptive, manic, and surreal verbal-visual comedy of these "funnies" fostered an absurdist sensibility embraced by The Marx Brothers (who took their names from a popular comic strip), W. C. Fields, Tex Avery, Spike Jones, Ernie Kovacs, and Mad magazine.  Comics scholar Paul C. Tumey traces the development of screwball as a genre in magazine cartoons and newspaper comics, presenting the work of around fifteen cartoonists, with an art-stuffed chapter on each. The book offers a wealth of previously un-reprinted comics unleashing fresh views of some of America's greatest and most-loved cartoonists, including George Herriman (Krazy Kat), E.C. Segar (creator of Popeye), Rube Goldberg (The Inventions of Professor Lucifer G. Butts, A.K.), Bill Holman (Smokey Stover), and Frederick Opper (Happy Hooligan). In addition, readers will be delighted to discover previously "lost" screwball masters, such as Gene Ahern (The Squirrel Cage), Gus Mager (Sherlocko the Monk), Boody Rogers (Sparky Watts), Milt Gross (Count Screwloose), George Swanson($alesman $am) and others.
at October 23, 2019