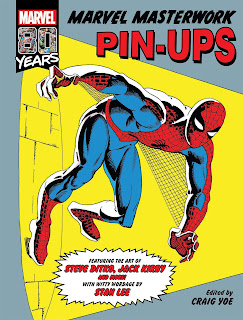 Marvel Masterwork Pin-ups
As part of the tremendous fun of Silver Age comics, artists created pin-ups of the most popular Marvel heroes and villains! Now the greatest of those works of art are gathered for the first time in a beautiful large-format hardback book! Included are rare examples of original art of The Thing, Spider-Man, and Dr. Strange. An incredible artbook showcasing Spidey, Thor, Iron Man, Captain America, The Avengers, Nick Fury, Daredevil, Millie the Model (!), and the ever lovin' blue-eyed Thing--and many marvelous more! Witty wordage, pulse-pounding patter, and zany zingers by Stan "The Man" Lee! 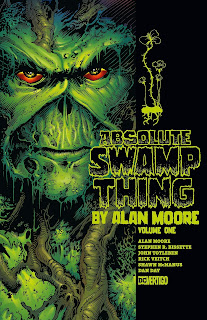 Absolute Swamp Thing by Alan Moore Vol. 1
In 1983, a revolutionary English writer joined a trio of trailblazing American artists to revitalize a longstanding comic book icon. By the time they'd finished their work four years later, SWAMP THING by Alan Moore, Stephen R, Bissette, John Totleben, and Rick Veitch was universally recognized as one of the handful of titles that defined a new era of complexity and depth in modern graphic storytelling, and their run on the series remains one of the medium's most enduring masterpieces.Now DC Comics and Vertigo are proud to present an all-new vision of this landmark achievement. Comprising three deluxe hardcover volumes, ABSOLUTE SWAMP THING BY ALAN MOORE debuts completely new coloring for every page, crafted exclusively for this definitive collector's edition by legendary color artist Steve Oliff (Akira, Miracleman). This first volume includes the issues THE SAGA OF THE SWAMP THING #20-34 and SWAMP THING ANNUAL #2 and features a monumental new afterword from Bissette accompanied by a wealth of historic behind-the-scenes material from the title's original creative team. 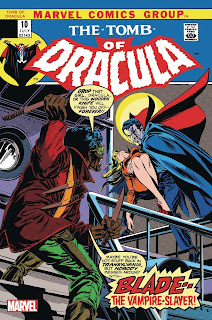 Tomb of Dracula #10 facsimile edition
Step inside the Tomb of Dracula, if you dare - and meet the deadliest enemy of the Prince of Darkness! His name is Blade, and he's a vampire hunter like no other - because he's part-vampire himself! The stakes are always high when Blade and Dracula clash, and that's never been more true than in their very first encounter! But what will fellow vampire hunters Quincy and Edith Harker make of Blade and his methods? This momentous issue of Dracula's classic series introduced the Daywalker - and set him on the path toward multimedia superstardom! It's one of the all-time great Marvel comic books, boldly re-presented in its original form, ads and all! Reprinting TOMB OF DRACULA (1972) #10.
at November 13, 2019