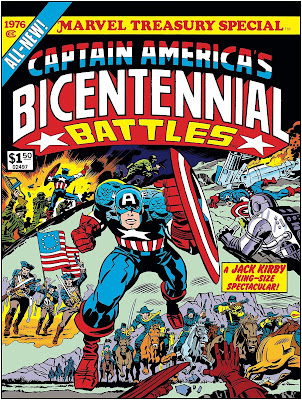 Sadly, I didn't nab an original of this one as a kid, although I bought many of Marvel and DC's big tabloid comics. I do have Kirby's masterful "2001" treasury edition, which may never be reprinted due to copyright considerations. Anyway, I've only read this one via scans online and look forward to adding this new edition to my bookshelf. Or floor. I don't have room on my bookshelves. I have piles of books all over my office floor... Oh well, you can pre-order this puppy from Amazon now.

The Marvel Treasury Edition that celebrated 200 years of the United States of America is back, as big as life and better than ever! From the unparalleled imagination of Jack Kirby, it’s a time-spanning adventure featuring Captain America on an incredible journey through his nation’s past — from the American Revolution through two World Wars…and more! Steve Rogers meets major historical figures, makes quite an impact on Benjamin Franklin — and takes inspiration from two centuries of American struggle and progress! Reprinted in all its oversized glory along with suitably patriotic special features, this is one of the Sentinel of Liberty’s wildest adventures of all, without which no Cap collection is complete!