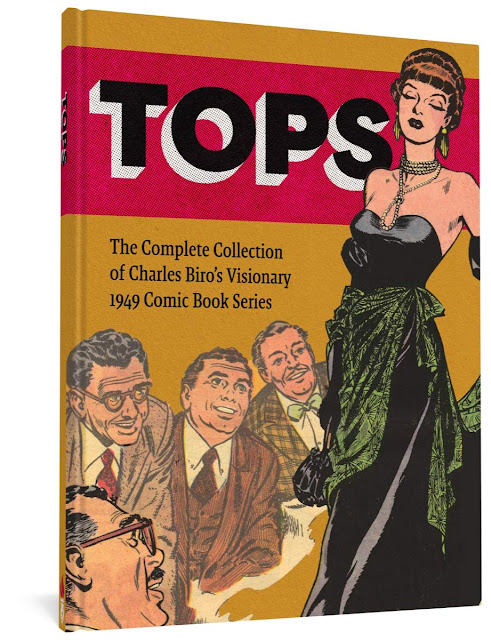 Out in January 2022 from Fantagraphics. Available for pre-order now from Amazon.

From their inception in 1935, comic books ― starring Superman, Batman, Captain Marvel ― had been primarily written for and aimed at adolescents. There were always the occasional outlier artists who pushed back against the commercial constraints of comic books and envisioned the next evolutionary artistic leap in the artform, and Charles Biro was one of those artists.

In 1949, the ambitious Biro ― who had previously co-created the realistically brutal comic Crime Does Not Pay ― edited and wrote an oversized comic aimed at adults called Tops. Like several other radical adult comics projects that would follow, it proved to be a commercial failure, and lasted only two Life magazine-sized issues. The original comics have since become a legendary holy grail among comics fans and historians, fetching as much as $6,000 on the collector’s market, written about, but rarely seen and never reprinted. Until now.

Fantagraphics’ Tops collects both issues of this oversized experimental comics in their entirety. These pulpy, sexy, and melodramatic stories were drawn by some of the best craftsmen working in comics at that time: Dan Barry, George Tuska, and others. It includes two stunning pre-EC crime tales illustrated by Reed Crandall, reminiscent of his Crime SuspenStories work. The actor Melvyn Douglas (believe it or not) takes the reader on a utopian tour entitled “How Would You Live Under A World Government?” ― a positive spin on global Socialism!

A treasure trove of fascinating and revelatory comics history for scholars and fans, this compilation includes an introduction by the editor, the historian and cartoonist Michael T. Gilbert, as well as several other essays providing background on the creation of the series and the publisher, editors, and cartoonists who realized it.  It also includes an essay chronicling experimental, adult comics endeavors throughout the first half of the 20th century. Tops is a landmark work of historical importance and a mind-boggling reading experience from a bygone era meticulously restored and reproduced in a deluxe hardcover in its originally published dimensions.