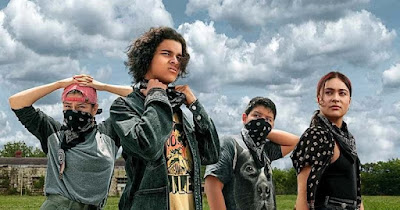 Reservation Dogs (FX). This is my household's new favorite show and right now it feels like the Best Show Ever.

Created by Sterlin Harjo and Taika Waititi, and reflecting the gentle absurdity and fundamental kindness of Waititi's best work ("Boy," "Jojo Rabbit"), it focuses on four Native teens living in Oklahoma and the adults around them.

Getting out and going to California is the sole aim of the teens. They want to get away from poverty, away from rival "gangs" (actually, just other kids as mixed as they are), and away from the sadness of a friend's suicide. But with each episode, we see how California is just a phony dream. It's not as human, real and funny as where they are right now.

The mystical mixes with the mundane. A deer lady kills male chauvinists in their muscle cars. Kids steal a chip truck. A cowardly warriors materializes to offer advice. There's a paintball shootout and a creature in the woods with glowing eyes. A girl takes her drivers' test and winds up in a shootout accompanied by her former basketball coach. The world developed here and the characters that inhabit it are unlike any other we've seen on television and we want to see more and more. A beautiful, moving and hilarious show. 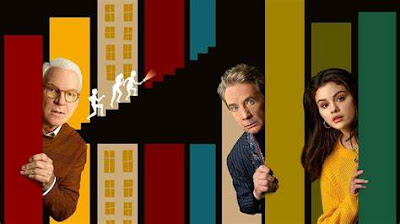 Only Murders in the Building (Hulu). Another one we're loving watch unfold. As a kid who grew up in the 70s and early 80s, I'm wired to love anything that has Steve Martin in it. Even more so with Martin Short included. But my high school-age daughter, who knows third key cast member Selena Gomez better than either of the Martins, is liking it, too. And why not? It's light. It's funny. It's charming and a bit unpredictable (I won't spoil an early superstar guest appearance).

Selena and the Martins are occupants of a luxurious but fading Manhattan apartment building called the Arconia who join forces to solve the murder of a fellow tenant. Each of the three is hooked on a true crime podcast, so they kinda know what they're doing, or so they think. Hi-jinks ensue, but they're witty more than silly, although there's some great physical comedy on display, too, proving that Steve still has his chops, as when he juggles a frozen cat that falls out of a neighbor's freezer. How can you not want to watch now? 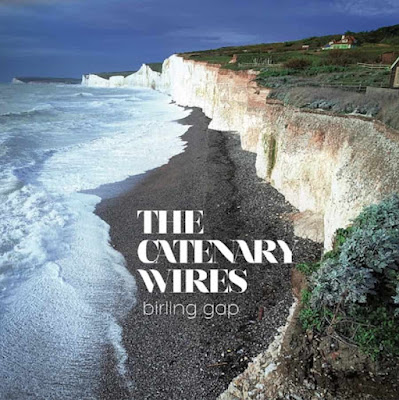 The Catenary Wires - Birling Gap. I love the vocal blend of co-singers Amelia Fletcher and Rob Pursey in this band, which specializes in a sort of classic British pop that includes elements of folk and light psychedelia with a dollop of 80s indy here and there. Nothing particularly groundbreaking, but good, solid songs with strong melodies and lyrics. Highlights include Fletcher and Pursey's delightful traded vocals on "Mirrorball" (her: wispy and tuneful; him: baritone-ish and dark); the bouncy sing-song sunshine pop of "Always On My Mind," and the baroque pop of "Cantenbury Lanes." Anglophiles with a love of Beatles, Kinks, XTC, Stone Roses and such will dig this. Here's a sample:
Drinking: