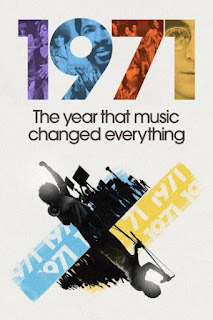 1971: The Year That Music Changed Everything. The assemblage of period clips here and the absence of talking head interviews interrupting them all is the plus of this look-back at when, according to the series' thesis, the Sixties became the Seventies. The minus is the jumbled, unfocused narrative and detours—such as an inordinate amount of time spent recounting PBS' early reality TV series, "An American Family'—that take us away from the musicians and their works. Still, it's worth a look if just for the performance footage alone, featuring the Stones (both Sly and Rolling), the Laurel Canyon crew, Marvin, Aretha and much more. Also, while there's no denying David Bowie's impact in the U.K. during this period, I think the series overstates his overall influence; it took the U.S. several more years to catch on to him. He only cracked the upper reaches of the American charts in 1975. 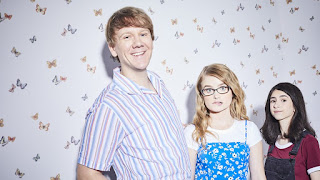 Everything's Gonna Be Okay. You'd think it'd be impossible for Australian comic to top "Please Like Me," but here he is back again with another tremendously profound, hilarious and human series, which places him as an older step-brother care for two teen step-sisters, one of whom is autistic, after his father dies. There's nothing cheesy for feel-good about the situations or interactions in this comedy. It's very real: People being snide, petty, funny and loving—generally all a once. 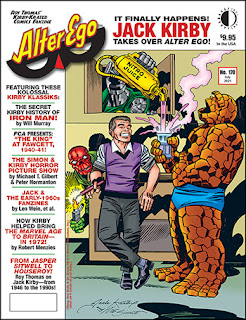 Alter Ego #170. The newest issue of Roy Thomas' fanzine takes a deep dive into the career and influence of Jack Kirby—territory generally left to TwoMorrows' sister mag, The Jack Kirby Collector. There's a look at Kirby's role in the creation and look of Iron Man, Kirby's contributions to 1960s fanzines, the artist's horror comics work and an examination of Stan Lee's comments about collaborating with Kirby. Thomas, who had a sometimes uneasy relationship with the King (he was parodied as Stan's sycophant in Kirby's Mister Miracle series, where Lee way portrayed as the self-aggrandizing con-man, Funky Flashman) discusses his mixed feelings candidly while coming to the same conclusion as most of us: Kirby was the best of the best and the Marvel Universe as we know it wouldn't have been here without him.
at July 18, 2021 No comments: 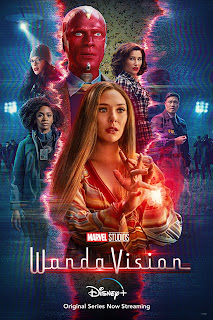 "WandaVision." Yes, I know I'm late the the party, but what a wonderfully weird and surprisingly moving series this is. It's the most thoughtful and creative Marvel has produced for the big or small screen to date, using parodies of American sitcoms from the 1950s to the present day as a way to dig into how avoidance of grief makes us all a little crazy. Many of us escape harsh reality by entering into the stories of people on TV. Wanda, however, has the ability to do what many of us would love to do ourselves: She goes straight through the screen, making her life a TV series, where the mood is light, the lame jokes funny and tragedy non-existent. And when reality does, inevitably, intrude, she responds with anger and a refusal to accept the truth, struggling to adapt to the way things now are. The series is brilliant, and a stunning showcase for Elizabeth Olsen's near-magical acting talents, demonstrating her ability to do just about anything, from light comedy and biting satire, to superhero action to tragic drama. 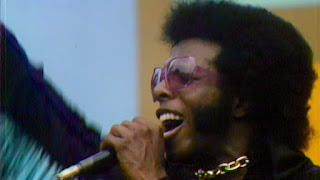 "The Summer of Soul." How could anyone forget about "The Black Woodstock"? Watching the amazing musical performances from Sly and the Family Stone, the Staples Singers, the Fifth Dimension and more, it seems improbable that anyone interested in pop music could be unaware of what went down at the 1969 Harlem Cultural Festival. This was an event on par, or maybe better than, Woodstock or the Monterey Pop Festival. Yet, an intended public TV film showcasing the music never aired and the event faded into memory. In this new documentary, Questlove explores why. The answers are as predictable as they are shameful and disappointing: Ignorance of Black culture and disregard for what's meaningful to Black audiences by our media gatekeepers and the implicit racism that remains a cancer within American society. Interspersed among the mind-blowing musical performances are contemporary news clips and new interviews that demonstrate how rapidly everything was changing—musically, politically, culturally—then, but how little has changed, sadly, today. This is an important, rousing and affirmative film that makes its point while entertaining us and inspiring us with its music. The only thing that could improve it would be more complete musical performances. My hope is that we'll see those, too, and sometime soon. How about also giving us the concert film that nobody saw, in addition to this fine documentary about the event? 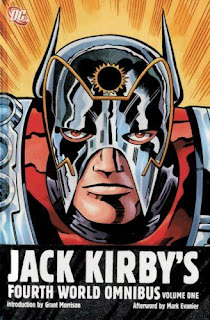 Jack Kirby's New Gods Epic. In celebration of the series' debut 50 years ago, I've made a summer reading project out of DC Comics' Omnibus collections of the King's Fourth World titles. I'm deep into volume 1 or 4 right now and am thoroughly swept up in Kirby's powerful art and relentless tide of incredible concepts and ideas. Yes, Kirby's often odd dialogue and "random use of quotation marks" requires the usual adaptation, but it all matters not at all after a dozen pages or so. He was, and remains, a master storyteller. People will be reading this in 50 more years, too, I believe. TwoMorrows Publishing's new "Old Gods and New: A Companion to Jack Kirby's Fourth World," which I just received as part of my subscription to the Jack Kirby Collector (but also available separately) will make this current re-reading that much more fun.